And they can stay mad. 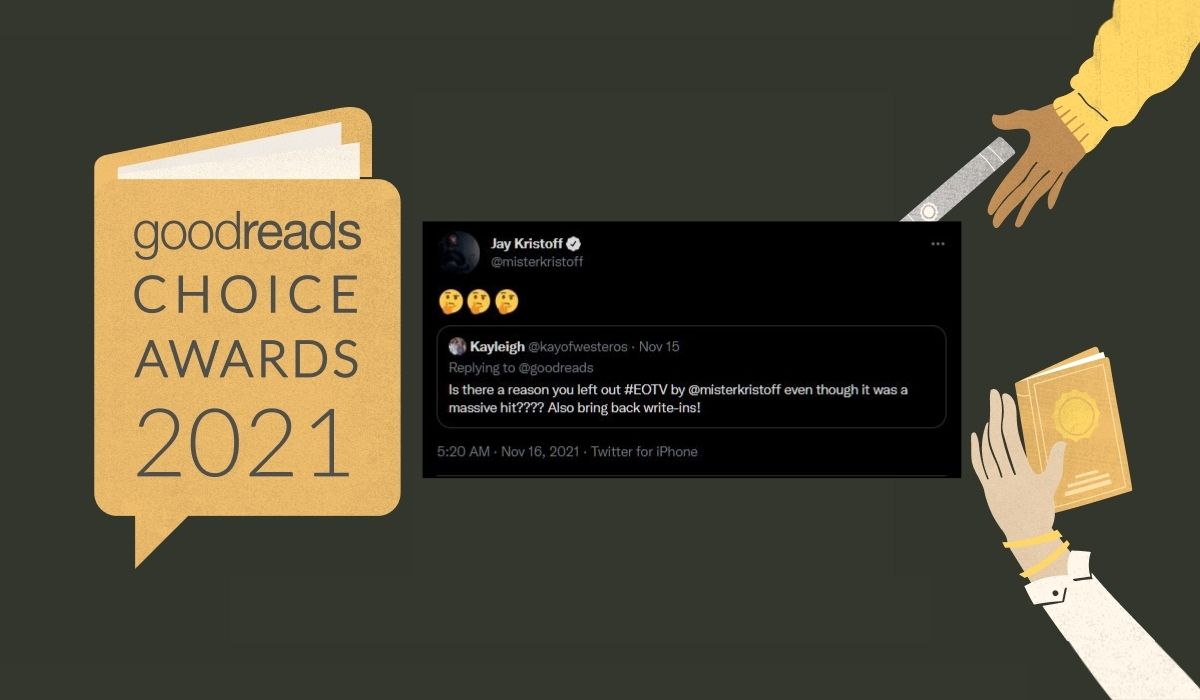 On November 16, Goodreads begin the opening round of their annual Goodreads Choice Awards, and many fans of author Jay Kristoff are upset that his latest novel, Empire of the Vampire, isn’t one of the 20 titles in the Fantasy category. It’s easy to shrug this off as fans being upset that work they value isn’t being recognized, but this is so much more.

This is before accounting for Kristoff’s past controversies, and his response to this one as he began sharing screenshots of upset fans and egging them on. Not only is that is worth discussing, but it’s also important to give context to the awards’ short history and the almost unbelievable amount of diversity of authors and storytelling on this year’s list.

In the past (and present still), the Goodreads Choice Awards have essentially been a popularity contest. Whoever’s work is most easily digestible to the masses wins their category—not to mention, of course, systemic barriers in terms of support, both in writing and marketing, and economic factors that play into who is ultimately most represented come awards time. We talked about this a few months back when discussing how “colorblind” and “merit-based” reading favors status quo, cis, white authors.

This is all to say that this popularity contest has been overwhelmingly white for more of its short (11-year) existence. The 2021 semi-finalist Fantasy list is comprised mainly of women authors, and about half of the writers are people of color. At least three non-binary writers of color made the first round, and many overtly queer fantasy novels.

Empire of the Vampire writer and readers

Kristoff shared his dismay about not even being nominated for the Goodreads popularity contest to over 120,000 fans, between Instagram stories and his Twitter following.

The implied criticism has been restrained enough to act like he doesn’t know what he is doing. He is “just” boosting fans’ frustrations as they play numbers games with other books nominated on the list. Some fans are crying foul play and “cancel culture” even though, if that were the case (and if there were any justice in this world), at least one other author would’ve been taken off the Fantasy list, too.

(Instead, she will likely win because she is very popular and has won a category 5 out of the 11 years.)

aside from jaybird kr*stoff sharing on his stories (which is immature), i do not like how this person singled out ‘sorrowland’ a book about the awful history of mistreatment of black bodies by the US written by a black nonbinary author https://t.co/2h6ZyPZkkd

Upon the news the next morning (November 17) that one of the two white men who were nominated this year in that category, John Gwynne, recently lost his daughter, Kristoff sent his fans to vote for Gwynne instead. Still, Kristoff’s message of support appeared in bad taste as he felt it necessary to bring up his own book’s exclusion again, and he hasn’t seemed to engage in any actual interrogation of why he feels the need to be validated by popularity contest as a full-grown, financially secure adult.

Who knows? Maybe he had a moment where he realized there are worse things than not having one of your books nominated for a Goodreads award? (Especially as a best-selling author.)

the blow the author of The Shadow of the Gods has suffered is the literal death of his daughter and Jay Kristoff has the unmitigated gall to make it about him and his deranged 700-page incel vampire book not being nominated for the Goodreads Awards.

you cannot make this shit up. https://t.co/7k12ISLQZD

In a 2012 interview with The Qwillery, Kristoff said his research for his novel Stormdancer was Wikipedia, drinking sake, eating pocky, watching anime, watching Seven Samurai, and reading Japanese fiction. He cited almost exclusively white men as his favorite authors and authors who influence him in that same interview. Nothing has shown that this carefree attitude about writing out of his lane has changed nearly ten years later.

Much of the issues with Kristoff involve cultural appropriation, as well as fetishization of various East Asian and Pacific Island cultures, questionable writing involving minors, anti-semitic content (in language use and in blood-libel tropes), anti-Albino tropes, and activity in a racist group chat (via Slack) with fellow white, problematic authors.

Jewish and Asian writers have spoken up about this, but it wasn’t until his resounding silence during the surge of AAPI hate crimes (plus the Slack chat) that many were made aware, and those who did know took his harm seriously.

Even after his half-assed apology, donation, and promise to do better, nothing appears to have changed for Kristoff. Despite a mounting supply chain issue for publishing (existing before and on top of the wider supply chain issues), EotV featured four different physical ARC (advanced reader copy) editions. And now he complains about his book not being on a list where historically under-recognized authors are being recognized in adult Fantasy?

A handful of Asian SFF authors (in adult and YA) are finally getting attention the last few years, and Kristoff’s immature replies and side-eyes show he is uncomfortable with this, as are many readers. That is clear by the fact that he is upset by a diverse lineup of fantasy books with a lot of Asian writers (not all from one part of Asia, either) getting attention.

This is not just a Goodreads problem, but one Twitter user pointed out how even when looking for Asian fantasy, Kristoff comes up.

If you don’t think the conversation about j*y kr*stoff getting famous from using Asian culture is important then look at this Goodreads list and tell me which one is the odd one out pic.twitter.com/6sGwqYVQbC

I told myself I wasn’t going to write or even acknowledge these awards, and here I am …

Not to defend an Amazon-owned company, but Goodreads has worked to remedy these inequities in publishing on the community and marketing side, not just by making booklists that highlight authors from specific backgrounds and highlighting books by authors of color, but also with the awards. This year, they ditched the write-in category (avoiding angry readers campaigning to boost their white faves) and appeared to look at qualitative review data (the actual content of reviews) as well as quantitative (sheer numbers).

For example, a book with 10,000 reviews, an average of 4.5 stars, and only a couple of the comments actually saying anything beyond “this rocked” or “this sucked” might have flown in years past. Now, they appear to be adjusting for bias and the words used to express happiness or dismay.

So, a book with 3,000 reviews, an average of 3.9 stars, and a higher percentage of fleshed-out reviews can compete. This will not only lead to a more equitable talent pool, but allow for debut authors to stand a chance against big-name authors or books in a series.

Taking in qualitative data can curb issues with review bombing (a problem Goodreads needs to deal with beyond these awards). Books or authors that are by marginalized people or speak up about injustice (anywhere online or in-person) are more likely to fall victim to 1-star coordinated review bombs (sometimes by big fans of other books).

One of the only responses in the original Goodreads Instagram post trying to reason with those upset about Kristoff missing from the list was bookstagrammer and reviewer Leah Rachel. She really put it best when she wrote this in reply to the upset Kristoff fans:

“Sorrowland is one of the biggest books of the year. It was innovative and made a big splash in the fantasy world. It’s a superb southern gothic written by a nonbinary Black author about body autonomy, Blackness, and more. When Goodreads says that their nominations are based on what readers have added, rated, and reviewed, they’re straight-up saying that it’s curated, they take readers’ attention AND their subjective feedback into account and make decisions. They’re not pretending it’s a straight numbers game in their answer.”