R.I.P. Jan Berenstain, Half of the Couple Behind The Berenstain Bears 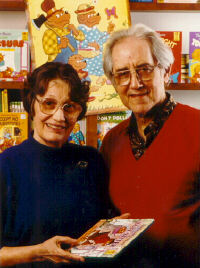 I can’t actually remember the first book I ever read, although Richard Scarry and plenty of books that came with a tape cassette of somebody reading them that I could easily slap into my Fisher Price tape player with the microphone on are among the earliest that I remember. Today, however, I am reminded that The Berenstain Bears was also one of my early literary conquests, with its (superlatively aptly described by Alyssa Rosenberg) Simpsonsian archetype of the nuclear family: bumbling Dad, organized Mom, and competitive children, facing near-universal problems of childrearing and adolescence together.

Jan Berenstain, one half of the husband and wife team who created the Bears, passed away this weekend at the age of 88, after a stroke.

The Berenstains were both art students, meeting on their first day of class in 1941. While Stan (who died in 2005) was (excuse my probably inaccurate pun) drafted into military service as a medical illustrator, Janice held up the home front as, yes, a riveter! The two married in 1946, and spent their lives collaborating on cartooning and illustration projects, eventually culminating in the first Berenstein Bear book The Great Honey Hunt, in 1962. Mentored by Theodore Geisel himself (that’s Dr. Suess to you), the stand-alone book eventually became a series featuring Papa Bear, Mother Bear, and Small Bear. But it wasn’t long before fans clamored for another addition to the family to give little girls a little girl bear to look up to, and Small Bear got a little sister and a name change. Brother Bear and Sister Bear were now the young reader heroes of the books.

Sister Bear, when she got a little older, proved to be a girl who loved sports and games just as much as the color pink, though she had a tendency to gloat; not bad for a character introduced due to fan request. The Berenstain Bear books were simple, and have been criticized for being didactic, formulaic, and hokey, but I’ll keep my good memories of early reading and just thank Jan and Stan for the experience.

(via The Daily What.)