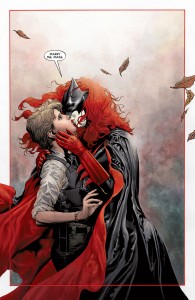 It was surprising because I had expected a PR push, but like I said it became apparent quickly that it worked in our favor that nothing was spoiled for the readers. It gave them an unexpected jolt, shaking them up emotionally. The issue got picked up by outside media regardless of PR, Reuters and Huffington Post, to name a couple. I love that because there is nothing worse than building up something that is important to how a story impacts the reader, ruining the moment for them is the worst thing you can do. I do despise spoilers. PR works best if it can tease efficiently without just blurting crap out. So even though we did not prime ahead of time in this instance at all, it turned out just fine, and gave it all an honesty and power that the scene much deserved. — J.H. Williams III, artist and writer on Batwoman when asked by Comic Book Resources about DC Comics’ odd lack of a PR push for the last issue.

I myself wondered why DC Comics had chosen not to make a big PR push for Kate Kane proposing to her girlfriend Maggie Sawyer in Batwoman #17 last month, since comics companies these days don’t really seem to care about spoilers if they can get some publicity about it, and only a few weeks later DC made my point even more relevant by spoiling a major death in the Batfamily all over the place. My last assumption was that perhaps Williams had specifically asked them not to spoil it, but this quote from his interview with Comic Book Resources would seem to indicate the opposite.

I’m glad that Williams is happy with the result, but still puzzled by DC’s lack of press for the issue. Still, the issue got enough press on its own, so maybe DC and Marvel will take the hint and stop spoiling everything.