The Mary Sue Interview: Kate Beaton On Step Aside, Pops, Her Fantastically Feminist Follow-Up To Hark! A Vagrant

"You see me rollin up pops you step aside." 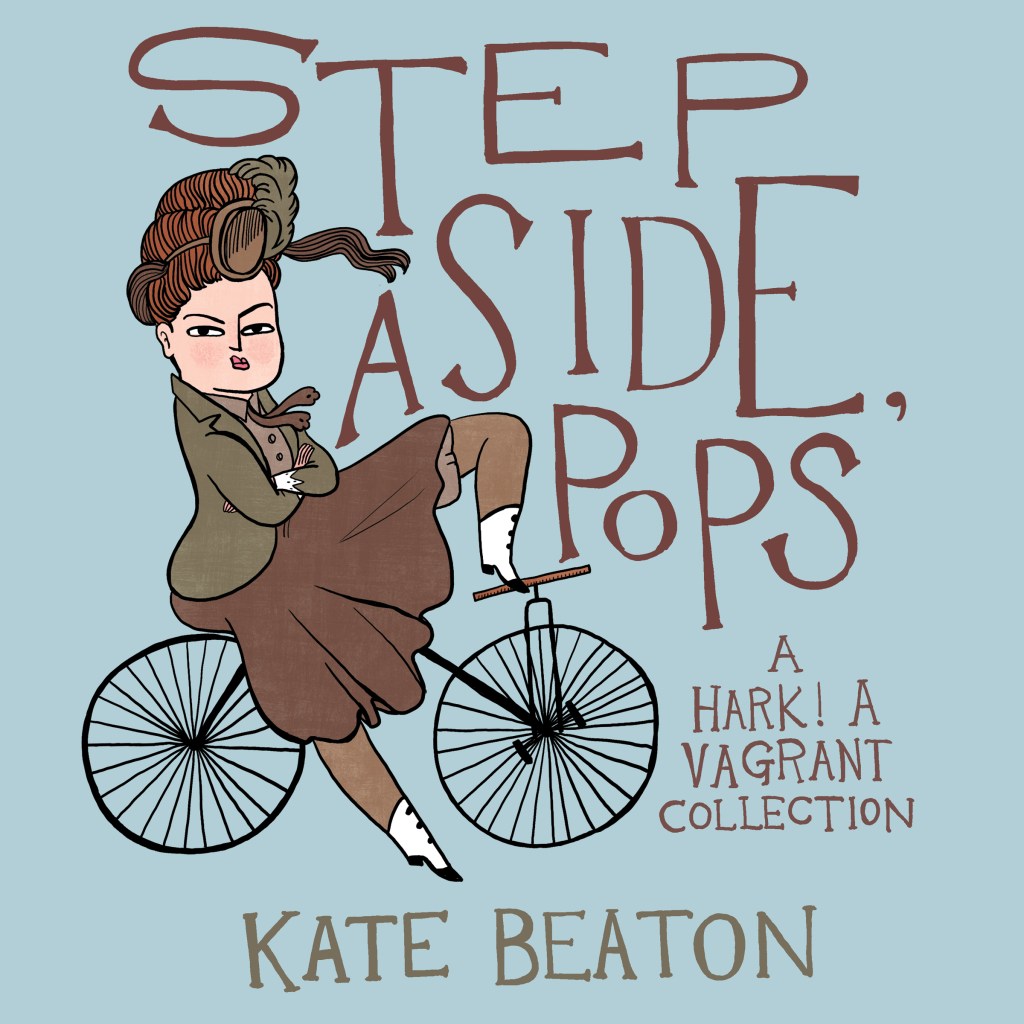 Kate Beaton took indie webcomics mainstream in the the most extreme way when Hark! A Vagrant dominated the New York Times Best Seller list (as it should have, for being so wonderfully rad). This fall, Beaton is heading back to the charts with her follow-up, Step Aside, Pops, which we already know is going to be great given the velocipedestrienne on the cover. Here’s what she had to say about her latest work of art.

Sam Maggs (TMS): Hark! A Vagrant was pretty much the best ever. What new and exciting things can we expect in Step Aside, Pops? How was curating this collection different than your first?

Kate Beaton: Aw man, that is a nice thing to say.  Hark! A Vagrant was a collection of comics from the site, plus some extras made just for the book.  It was pretty basic in planning!  Step Aside, Pops is much the same, though there is no new content – there was enough to fill the book.  So in that way they are the same.  But the comics in the new book are more varied than in the first, playing with form and moving away more from the history/literature parody type stuff more often.  There are definitely more comics that focus on things like feminist jokes.  It’s all just about what I’m interested in making at the time, so it changes.

TMS: Your suffragette comics are some of our favorites here on The Mary Sue. Will we be seeing lots of famous feminists in this new volume?

Beaton: Suffragettes!  What a mixed bag they are, no?  Lots of opinions about the heroics and non-heroics of that crew in this more discerning age about who gets to or should be admired, historically.  But anyway – yes lots of feminists!  Like I said before, the comics are a reflection of what I’m interested in at the time, or what I read up on.  I think from the beginning, just making historical comics that featured women at all gave me a name for being feminist comic artist.  So that turns heads.  And a lot of times, if you’re telling a woman’s story from the past, there’s going to be something in there about how she was overlooked by her peers or over time.  It’s just there.  But these women, underdogs sometimes, are usually someone’s hero, someone who wants their story to be told.  So I make these comics about women, and I get a lot of mail that’s like, “check this other person out!!  YOU WILL LOVE HER I LOVE HER!!!”  And I’m thrown all these stories, and of course they are interesting.  And when you get into it, you get all riled up, like yeah people should know about this person!  And this person!  And this person!  Why didn’t I know about this person?  I think it started a long time ago, specifically, when I made a comic about Rosalind Franklin.  Lots of mail from people trying to get me to read about this female scientist or that who was maligned by history or in her time.  Really passionate.  It’s very touching, in the end, telling these stories is just sharing the love you have.  That love is contagious.

I mean history is huge, you’re not going to know everyone, but with women, you really are going to know less.  So I find out about people like Ida Wells or Sara Josephine Baker and I’m pacing the room thinking, “I gotta make a comic!  People have to know!!” 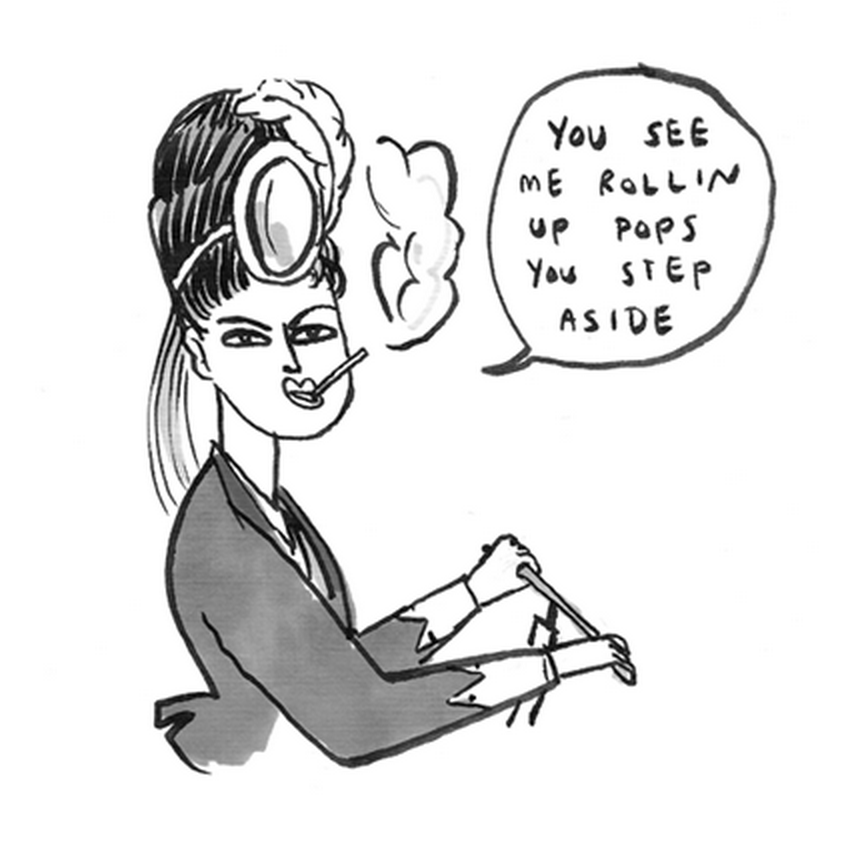 TMS: Of all the historical figures you take on, can you choose a favorite? Why do they resonate with you?

Beaton: I just said her name before, but Ida Wells is my hero, and I didn’t know she existed until a few years ago.  I was at a museum in Chicago and walked by this picture of a woman handing out fliers at the World’s Fair.  And I remember being struck by it thinking “well who is that?”  But you know in museums you’re sort of shuffling along, and I don’t think I even read the whole description underneath.  But I never forgot the image of her.  Years later I was thinking about it and I looked her up.  And what a thing to dive into, what a person she was.  I’m going through all these emotions reading about her, I’m in awe.  And I want to make a comic about her but I don’t, because I respect her so much, and there’s nothing funny about a lot that she went through and fought against.  Nothing at all.  I’m thinking, “I can’t make some stupid poop comic about this woman!”  That would be out of line for the respect I have for her.  But more time passes, and I start to look at my work, and I’m thinking that if you leave out these people whose lives were hard and who were overlooked in history, and instead you just go for the easy targets, you’re just making comics about dead white presidents and leaving stories like Ida’s out yet again.  It’s not like my comics are some kind of cultural masterpiece, they’re just dinky comics, but you know what I mean?  So I made comics about Ida, and they are in the book, and I hope I did a good job, because I wanted to celebrate her.

TMS: You’re also working on a children’s book, The Princess and the Pony. Can you tell us a little about that, and how the process of working on that differed from Hark! and Pops?

Beaton: The Princess and the Pony comes out soon!  I got a note from Scholastic after Hark! was published, expressing interest, and I jumped at that.  I think everyone would like to make a picture book if they could, right?  Children are an amazing audience.  If they like you, they like you with everything they have, and if they don’t like you, they move on without comment – it’s not like they have bad things to say.  Imagine that, after working for the internet!  But what a privilege to get a chance to make a kids book, you know that if it becomes someone’s favourite, they remember it for ages.  We all remember our favourite books.

Kids are a totally separate but equal audience from adults.  I had to learn the little ways how that was – both are intelligent, you never talk down to kids.  But I wrote so long for this educated adult audience, it was harder than it looked to go to this place where you’re not invested in nostalgia at all, you’re living it.  So it took a few rewrites.  I’m so honed into one audience, it was a challenge to shift, but a good one.  For the book, I just wanted to make something that would make kids laugh, and the Pony character was a natural choice.  And since I am one of four sisters, it was probably going to be about a girl, that’s my whole childhood.  I debated the princess thing.  I loved them when I was little, looovved them.  I felt, thinking back, it was my choice to love princesses, I don’t know that I felt like it was a thing being sold to me, though it almost certainly was.  I concluded that if I was going to have a princess, what mattered most was what her goals were, who she was, and who she wanted to be.  It doesn’t matter story-wise that Princess Pinecone is a“princess,” if I didn’t tell you she was, you wouldn’t know.  Sometimes I feel like she named herself that, like little kids sometimes do.  Playing, but saying, “this is who I am,” and asking you to recognize it.  It’s easy to see why a kid might like to be a princess, they have autonomy, and they can make choices, and they have tools at their disposal.

Princess politics!  But as we all know, the book goes back to the Pony, the show stealer.  Big things coming in small, round packages.

TMS: Hark! was a bestseller and you’re beloved on the internet. What is it about your comics and your wit that you think people identify with so strongly?

Beaton: Lord, I don’t know!  I like to make people laugh, and I like to think that my sort of humor is inclusive and kind of joyous instead of snarky or what have you.  I don’t like mean humor.  I like silliness, but I’m serious too about the things I like.  And I try to be personable and knowable as a creator, I like people to think of me as a human being, not a thing that just emits content.  So I’ve built a relationship with the audience from the beginning, like a lot of webcomic artists, just talking to them, and them talking to me.  That said, I am horrible at answering emails.

Step Aside, Pops is available on September 22nd from Drawn & Quarterly. The Princess & the Pony is available July 1st from Arthur A. Levine Books. Kate Beaton remains hella rad.