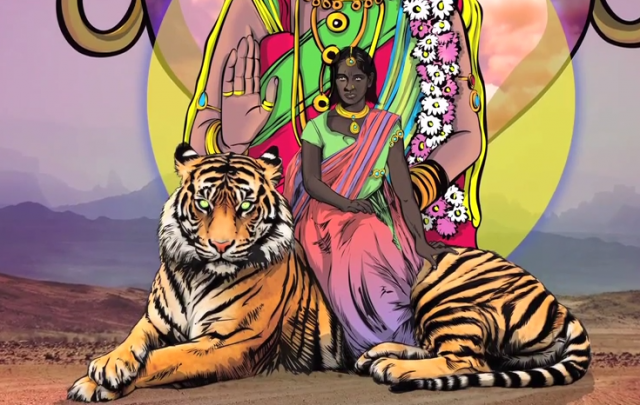 A free-to-download comic book in India is currently making waves across the Internet, and not just because its awesome female superhero rides a tiger into battle and gets her powers from a Hindu goddess. That’s just a kick ass bonus to the real theme of the book—enacting social change to improve the lives of the the tens of thousands of Indian women who report being raped each year.

Priya’s Shakti, written by Ram Devineni and Vikas K. Menon with art by Dan Goldman, tells the story of a rape survivor who teams up with the Goddess Pavarti to speak out against the sexual violence and discrimination that so many Indian women face. Devineni, an Indian-American filmmaker, says he was inspired by the Delhi bus gang rape of 2012, and wants readers to understand how difficult it is for women who survive sexual assault in India to come forward and seek justice without being further targeted for public shame by their communities. 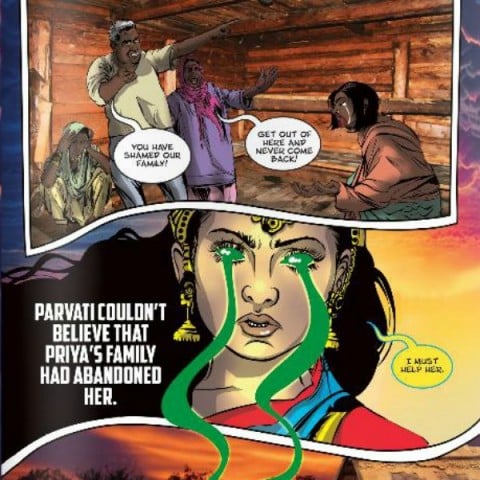 The Tribeca Film-Institute-funded project also has an augmented reality component that contains animation, videos, a hashtag campaign (#StandwithPriya) and real-life accounts from Indian survivors of sexual assault. Users can scan the AR code found in either hard copies or digital downloads of the book (which you can download for free if you like their Facebook page), as well as on murals that the creators hope to paint “all over India.”

“The content provides a deeper understanding of the issue of sexual violence and takes the readers beyond the story of the comic book,” Devineni told Mic.com. “I was trying to figure out how to show the struggles of real survivors of rape in the comic book, and augmented reality allowed them to tell their stories in their own voices.”

A common complaint for many comic fans who want better female representation is that while most male vigilante’s origin stories involve someone close to them getting hurt, the origins for women instead usually involve them getting hurt—especially raped, of course—and fighting back. But by that same token, seeing women who are not only able to go on with their lives after being assaulted but also change their world for the better can be very powerful, especially for a culture that’s so quick to judge these women. It’s also heartening to see Priya depicted as a darker skinned heroine, something that’s not only rare in comics at large but also important given India’s noted problems with colorism.

Priya’s Shakti won’t officially debut until the Mumbai Film and Comics Convention next weekend (Edit: It’s also worth mentioning that the book will be available in English, Hindi, and Marathi, and will eventually be translated into other languages.), but you can currently download the first issue for free on ComiXology.