Just How Queer Is Marvel’s Eternals? 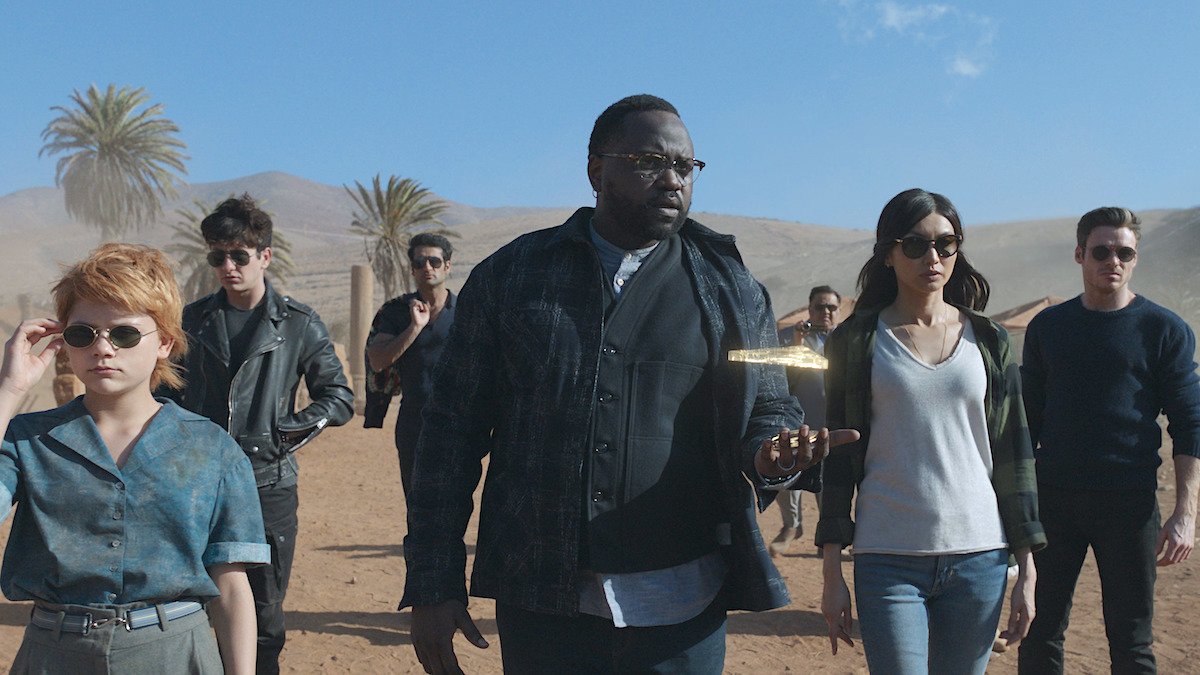 I saw Eternals this week and really enjoyed it. The reviews for the Chloé Zhao-directed Marvel film have been mixed, and I have my own theories I’ll expound on as to why once the movie has been released. But you’re here to find an answer to a singular, vital question: just how queer is Eternals, which promised our first big-screen MCU queer superhero?

The answer, delightfully, is very queer.

For many months, we’ve known that the Eternal tech whiz Phastos, played by Brian Tyree Henry (Atlanta), would be a gay superhero. Then we learned that he would be a gay superhero with a husband and a child. Ever since, I’ve been waiting, and crossing fingers and toes, that Marvel Studios wouldn’t drop the ball on representation here.

My biggest fear for Phastos and his family going into Eternals was that the true depth of their relationship wouldn’t be acknowledged. I was imagining that the movie might skirt over the couple’s queerness and give them the sort of shorthand we’ve seen in Disney and other big productions far too many times before. Vague language, maybe an ambiguous hug in the background. A passing reference or singular line that could be missed or excised entirely. Sadly, this is the sort of thing we’ve become conditioned to expect when giant studios tout “queer representation.”

In the movie Star Trek: Beyond, there was much ado in the press about Sulu having a husband and a daughter—but they are only seen walking off together in the distance. Blink and you’ll miss them, the same situation that has played out in far too many other tentpole productions like Star Wars: The Rise of Skywalker and Avengers: Endgame after the promise that LGBTQ+ characters would be included. This was what I was afraid of for Eternals—that we’d meet Phastos, and he’d wave goodbye to his family, leaving the whole thing open-ended. Maybe half the world would be left thinking his husband was just his roommate.

But Eternals doesn’t do this to us. Instead, Phastos and his husband Ben (played with warmth and verve by openly gay Lebanese actor Haaz Sleiman) have a vocal and physical loving relationship and also have the most adorable child on Earth. We spend several scenes in the house that they share, and the nature of their relationship is never open for interpretation or left ambiguous. They are deeply in love and wildly supportive of each other.

They are also shown to be wonderful and engaged parents to their young son Jack (Esai Daniel Cross), who, and I cannot emphasize this enough, is so cute and sweet he makes your teeth ache. Not only do we get a family with two adoring dads, but their precocious, happy kid is a product of that well-adjusted family environment. Never for a single second does Eternals hesitate to show a queer couple in love and leading a contented and untroubled life together. And the familial cohesiveness especially stands out in the MCU, which tends to be a place of terrible fathers and dead mothers. 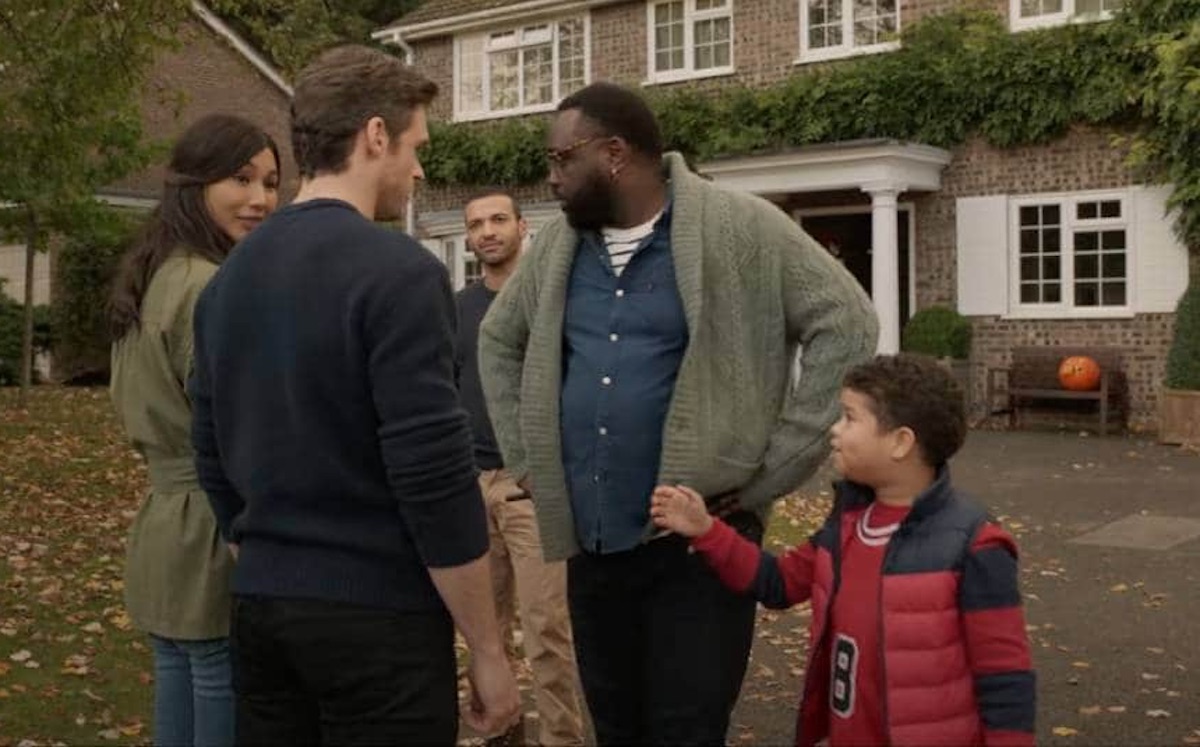 Sure, this idyll is complicated a bit by the development that Phastos is an Eternal being who’s been alive for thousands of years and has godlike powers, but even this snag can’t drive a wedge between them. In fact, everything that Phastos does he does in hopes of helping his own family persevere. While he still cares about his Eternals group, he’s long since left them behind and found a reason to still believe in humanity through Ben and Jack.

I don’t want to spoil any of the specific moments here since Eternals isn’t out until November 5th, but I can’t wait for audiences to meet Phastos and his family. When they are on-screen, there is a mix of affection, humor, tenderness, and well-rounded representation that is quite a feat to pull off in a film already packed to the brim with many central characters and their lengthy history.

It should not have taken Marvel Studios 24+ movies since 2008 to introduce their first big-screen openly gay superhero. We’ve been waiting for well over a decade, and this representation should have come far sooner. Until Loki mentioned his bisexuality on Loki in 2021, the MCU and Disney+ series produced by Marvel Studios had never acknowledged queer people to exist outside of a vague reference in that Joe Russo Endgame cameo. The wait has been frustrating and to add insult to injury, time and time again we heard that queer elements were cut from other films.

But since we were made to wait, I’m so glad the first fully-fleshed queer representation comes via Phastos. Brian Tyree Henry is an excellent, emotive actor and the character feels grounded and real; that Phastos, Ben, and Jack are all played by actors of color adds additional, poignant layers of representation. And the importance of Phastos and his family cannot be overstated. I think about young viewers, queer and not, getting to see a proud queer couple and a gay superhero who says he wouldn’t change anything about himself. I think about older viewers seeing the same. I think about the children of queer parents finally getting to see themselves reflected in Jack.

“Beyond a dream come true, it’s life-saving,” Haaz Sleiman, who plays Ben, told Variety at the Eternals premiere. “I wish I had that when I was a kid to see this. My god. I wish! Can you imagine how many lives this is going to be saving — kids, young queer folk, who are being bullied, committing suicide, and not seeing themselves being represented? And now they get to see this — it’s above and beyond.”

And this, folks, is why representation matters. Beyond affirming and inspiring, it can literally be life-saving. Variety further notes how Brian Tyree Henry spoke of Phastos at the Eternals October press conference. Henry’s own journey with the character mirrors Phastos’s experiences in the story:

“I remember when I was coming to this project that I, Brian, had kind of lost faith in humanity, just looking at all the things that we’ve been through and just what the images of Black men were and how we’re being portrayed and how the power was taken from us, the lack of power or feeling powerful,” Henry said.

“What I really loved the most about Phastos is that through all of that — him being eternal, him never being able to die — he still chose love. He still decided to have a family, even though he may have to watch them perish. He still tried to find a way to bring heart and love to everything he did, even though his genius was used against him. It just really resonated a lot with how I felt my place in society was. How we can be kings and queens, and at the same time, they’ll take our pedestal and take our superpowers from us like that. So what I love the most about ‘Eternals’ is that Chloe and [producer] Nate [Moore] just re-instilled that power back in me again.”

There are many plot elements and characters to enjoy in Eternals, but Phastos—who “still chose love”—may be my favorite.

And of course, in considering the overall queerness potential of Eternals, it must be pointed out that this film contains one of the most attractive casts of all time, and someone for literally everyone so inclined to crush on.

From Henry’s brilliant, sensitive Phastos to the flawless Gemma Chan as Sersi to Kumail Nanjiani’s charismatic Kingo, Richard Madden and his gray streak as Ikaris, Ma Dong-seok’s brave and bold Gilgamesh, bisexual icon Angelina Jolie in gorgeous white armor as Thena, Salma Hayek’s beautiful and regal Ajak, Barry Keoghan’s broody Druig, and Lauren Ridloff’s stunning, fleet-footed Makkari, the cast and the universe Zhao created around them are a feast for the senses and a triumph of representation. These actors hail from all around the world; their accents and languages fill the air, and they move us away from everything we’ve come to expect from a “typical” MCU adventure.

If Eternals is indicative of a new future for Marvel Studios, we’re going full speed ahead in the right direction.