Hello Kitty in Space Won Not Only Our Hearts, But Also the Science Fair 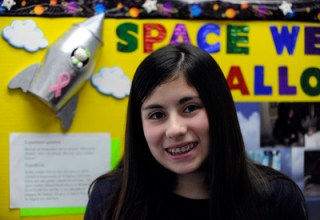 Remember Lauren Rojas, the 13-year-old budding scientist who launched a Hello Kitty doll into space to test “the effects of altitude on air pressure and temperature”? The judges at her school’s science fair liked her project as much as the Internet did: She was named one of the four top award winners at Cornerstone Christian School’s seventh-grade science fair and will go on to compete at regionals. Godspeed, Lauren.