Why People Were Furious With How George R.R. Martin Hosted the Hugo Awards 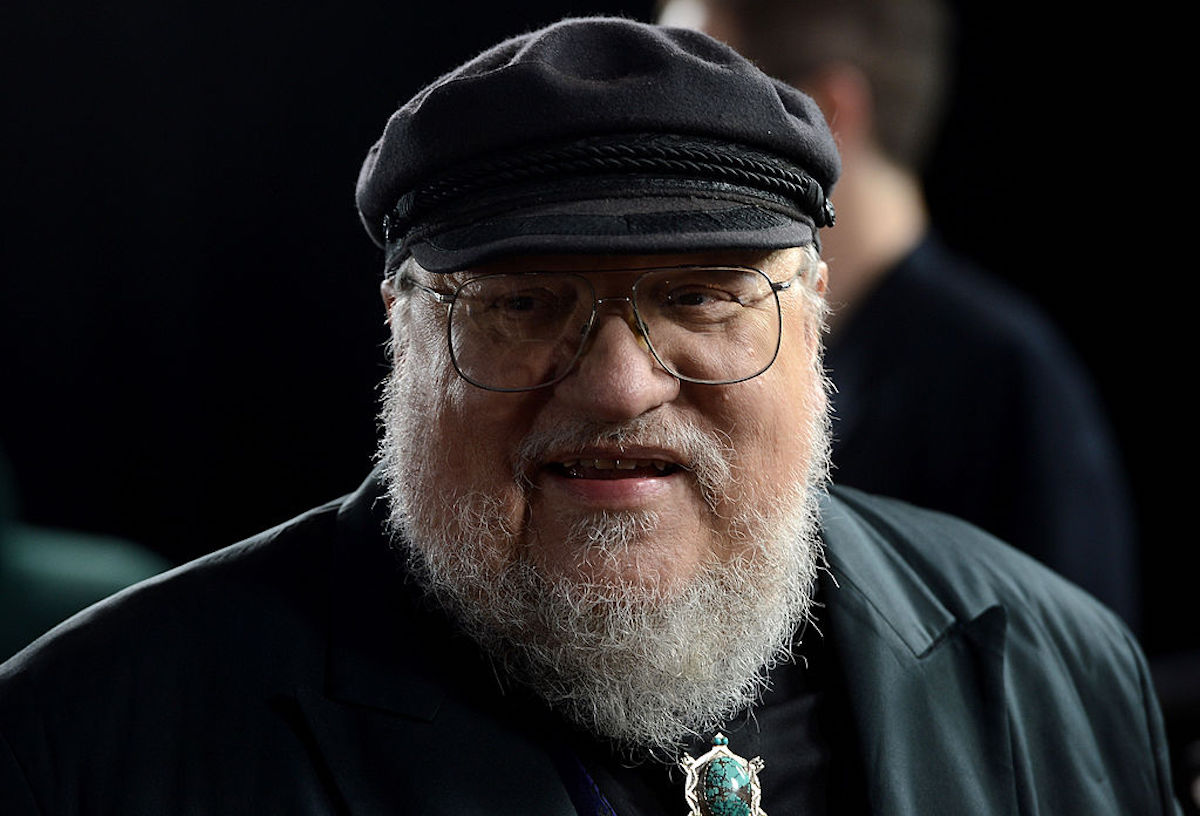 On August 1st, Game of Thrones author and living embodiment of failure to meet deadlines George R.R. Martin virtually hosted the Hugo Awards, the most prestigious award in science fiction. Many people watching worldwide, including finalists and winners, were horrified by Martin’s hosting, in which he repeatedly mispronounced names, waxed rhapsodic about exalted figures from SFF past who are now rightfully called out for their racism and sexism, made “gender essentialist” jokes, and in general rambled on past the three-hour mark. The backlash on social media led to a mealy-mouthed apology from organizers CoNZealand and a lot of excuses from Martin.

“gosh, remember the pandemic Hugos when GRRM was an absolute fuckstick & the online ceremony took for fucking ever & people’s names & publications were mispronounced constantly due to a complete lack of respect for the nominees & winners?”

what a contribution to the genre, lads

“Imagine a dumpster fire in a train wreck. That’s what this awards ceremony sounds like,” writes PZ Myers over at Freethought. For a comprehensive, scorching breakdown, Natalie Luhrs has a “rageblog edition” available here, fittingly titled “GEORGE R.R. MARTIN CAN F*CK OFF INTO THE SUN, OR: THE 2020 HUGO AWARDS CEREMONY.”

Running WorldCon and hosting the Hugos is a massive work of hospitality and community-building.

That the awards team and GRRM have been so disrespectful to finalists and community members is disgusting and must not go unanswered.

An overall feeling from the reactions rolling in after the Hugos was that Martin’s hosting stood in stark contrast to the slate of actual winners, which reflected the growing inclusiveness of the science fiction community. Science fiction was a field largely dominated by white men for decades—as Lurhs points out in the “rageblog,” it took fifteen years after the awards’ inception in 1953 for a woman to win a Hugo, and until 2016, when N.K. Jemisin won for The Fifth Season, no African-American author had won in the Best Novel category (Jemisin would go on to win three years in a row, an unprecedented hat trick).

Even in mentioning Jemisin, Martin took the opportunity to speak over her achievement, as The Daily Dot reports:

And when mentioning N.K. Jemisin, a Black female author who won best novel three times in a row—an accomplishment Luhrs rightly pointed out is unprecedented for the Hugos—Martin turned it into an excuse to harp on the achievements of a white male author who won the award three times over a span of nine years.

The 2020 Hugos saw many awards going to women, people of color, and queer-identifying authors. Martin was a poor choice for an avatar to reflect the spirit of a rapidly changing field.

Author Sarah Gailey neatly summarized how the ceremony felt for many involved and watching from afar:

Last night’s Hugo Award ceremony was an embarrassment and a insult to the entire genre community. Every aspect of it that could have been celebratory, kind, or thoughtful was devoured by the cowardice and narcissism of an “old guard” that is terrified of its own irrelevance.

As Gailey mentions, Martin appeared to be on a kick celebrating the old guard in science fiction, and did so again in conversation with Robert Silverberg. Martin is 71 and Silverberg is 85, but their ages are no excuse for being so out of touch and out of step with the accountability now demanded by later generations—especially when it has become such a flashpoint within the community. There was particular condemnation over Martin’s praise of John W. Campbell, who has been so roundly rejected due to his history of racist editorials that the Hugo award named for him was renamed the Astounding Award in 2019. This was a major event in the science fiction universe; to hold up Campbell’s name a year later is a willful decision.

i really do not wish to whine about GRRM for hosting the hugos, which i am listening to in another tab, but uh 90% of what i’ve heard so far is him praising… ye olde racists robert silverberg and john campbell and noted sexual harassers harlan ellison and isaac asimov?? 😬

This thread provides excellent historical context on George R.R. Martin’s performance at the Hugo Awards this weekend. As @jessnevins suggests downthread, it was something of a last hurrah for the so-called Golden Age, with John W. Campbell as science fiction’s Robert E. Lee. https://t.co/JY41qrTZkP

There was also outcry over the fact that Martin repeatedly mispronounced names of winners and nominees, including the magazine FIYAH Magazine of Black Speculative Fiction, which was nominated for Best Semipro Zine. As Luhrs points out, FIYAH is “a publication owned, edited, and written by Black people.”

What made Martin’s mispronunciations even more egregious was the fact that those involved in the Hugos had been asked to provide phonetic pronunciation guides for their names. It was initially unclear whether CoNZealand failed to provide these to Martin or if he simply ignored them. (Martin now says that he was only given the phonetic pronunciations for a few names, and apologized to those whose names he botched—though there are quite a few dismissive excuses in there about how often he botches names as though this were an impossible and inconsequential task to master.)

GRRM was provided with a pronunciation guide for the names of the Hugo Finalists. Don’t tell me he doesn’t know how to pronounce the names of authors on the biggest night of their careers when dude has a character named Daenerys fucking Targaryen. The absolute disrespect.

I think GRRM, the host of the Hugos, mispronouncing the name of a Hugo-nominated magazine is pretty fucked up. Dismissive. Unprofessional.

So, I’m going to buy annual subscriptions to FIYAH for the first 6 people who DM me.

And I encourage folks with the means to do the same. https://t.co/1wMuoET9O2

If this wasn’t already maddening and exhausting, there’s more! As Luhrs calls out, there was an entire segment about the “crotch” of the Oscar award:

There was also a whole segment about the Oscar statuette and its crotch. It was gender essentialist and transphobic. It was so gross I don’t even want to talk about it to be honest. CoNZealand tweeted a non-apology apology about it to people who were offended. I’m not particularly gender non-conforming, but if that segment made me feel gross and unwelcome, imagine how it made not only the trans and other gender non-conforming nominees feel, but also all those who were watching. It was a gigantic “f*ck you, you’re not welcome here.”

CoNZealand eventually tweeted an apology for “[getting] some things wrong,” “any disrespect implied,” and acknowledging that they “did not overcome the challenges [they] faced.” But the brief apology dodges responsibility for the show’s trajectory and does not offer any real explanations. It’s clear that since segments were pre-taped, they could have insisted that Martin re-tape many of the areas that would prove objectionable, and they did not. Martin claims that the only segments he re-taped were for technical reasons.

I was asleep during last night’s Hugo ceremony, but from what I’m reading about it, and now from this, it appears that for the second year in a row, a Worldcon is having to apologize for decisions made unilaterally by GRRM. https://t.co/muxIZgSdch

As for Martin himself, he tweeted out a picture with a quote from Voltaire, “We are all full of weaknesses and errors; let us mutually pardon each other for our follies,” with the caption “Words for our times,” which is peak Not Getting It or Taking Responsibility For One’s Own Actions. While Martin has also now written a more extensive comment explaining some of what happened from his perspective and the “general tenor of [his] toasting,” well, it’s not great in that it refuses to acknowledge any of the community’s concerns about the men he lauded or really why that general tenor went over so badly. It’s also a public comment, but he has not drawn his wider audience’s attention to it on social media.

George, I was deeply honored that you asked me to present an award last night.

I am very angry at the choices you made with the ceremony. If you would like me to explain why to you, you have my phone number.

From writer Alasdair Stuart, a lamentation that an excellent and wonderfully representative slate of finalists and eventual winners had to participate in the ceremony that they did. (You can check out a full list of the winners, and even watch a cut-up version of the ceremony that focuses on the winners and their acceptance speeches rather than Martin.)

It struck me as an egregious case of failing to read the room on GRRM’s part, the “room” being the people engaged enough to vote for this particular set of Hugo winners, many of whom seemed deeply involved in struggles of representation that GRRM just doesn’t get. 1/x

There are, however, some silver linings amid the old men yelling at clouds.

If you suffered through the #HugoAwards just remember that GRRM spent three hours being pissy at @jeannette_ng for last year’s acceptance speech only to have to give her yet another Hugo for that exact speech.

The Hugos gains more legitimacy, more relevance, more clout from the participation of marginalised writers than we do from them.

Without us, they stop being the future. https://t.co/Es7jSuP1kZ

Please watch Ng’s powerful speech from 2019, which got Campbell’s name removed from the award she won, and won a Hugo of its own this year for Best Related Work. Ng’s speech still rings as vital and resounding as it did last year—and, for good and ill, could serve as a commentary on what happened in 2020.

John W. Campbell, for whom this award was named, was a fascist. Through his editorial control of Astounding Science Fiction, he is responsible for setting a tone of science fiction that still haunts the genre to this day. Sterile. Male. White. Exalting in the ambitions of imperialists and colonisers, settlers and industrialists. Yes, I am aware there are exceptions.

But these bones, we have grown wonderful, ramshackle genre, wilder and stranger than his mind could imagine or allow.