Nope. Shut it down. 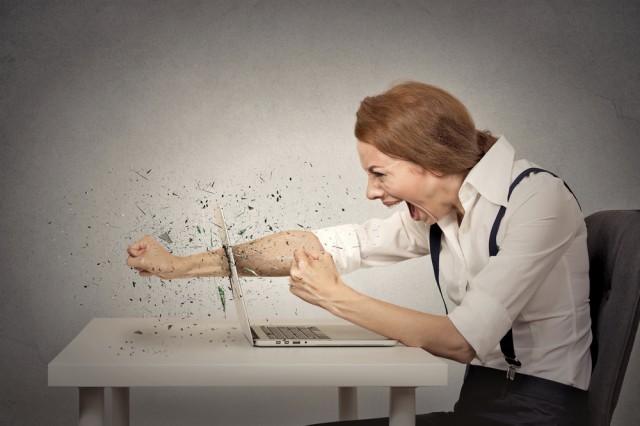 This. This is the kind of shit we were talking about when we suggested that maybe Reddit’s new investor dollars could help them respond more quickly to awful things that are happening on the site. Massive, massive trigger warning.

Thankfully, response to the subreddit “The Philosophy of Rape” by Reddit’s own users in the comments has been negative across the board. It appears the entire thing was started five days ago by a single user, also named ThePhilosophyOfRape, whose “philosophy” hinges on the loose assertion that women have too much confidence and need to be taught a lesson. Until now, I didn’t know it was possible to gag on your own words while typing.

Here, I’ll just quote from the subreddit’s first post, typos and all, so I don’t have to try to explain the unexplainable:

These harpies need to be humbled. And for their own good. Like the child with absolutely no boundaries and no discipline, they may feel they yearn for no rules, but become absolutely lost without an adult to tell them no! If you’ve ever met such a kid, the type who can have anyone over, at anytime, and do anything, is miserable. The insertion of an authority figure who deals out punishment is met with intense anger and resistance. But the discipline is what was so badly needed. The slaps and smacks may smart, but it helps the child have some semblance of direction as they develop.

These hussies are so far gone, living in a world that is a virtual macrocosm for them of the home for the child with the completely negligent, permissive parent. Disciplinary smacks and slaps come in a different form for these more grown children (college women), since the situation was more extreme in permissiveness and went on for more years. But the curing power of good ol’ fashion physical strength wielded to correct can not be understated.

It’s not only morally justifiable to rape such a woman, it’s and brave.

At the risk of stating the obvious, this isn’t true for all female human beings. We’re not talking about nuns or grandmothers or humble, married, women of twenty years.

For the good of society these women need to be raped.
Here we will teach how to do it safely.

Yes. Someone has certainly gone too far and is, “Oblivious and loud. Shameless. Belligerent. Entitled.” Yes, that person should absolutely be shown that society will not accept their behavior, and that person is ThePhilosophyOfRape. He seems to be the only person actually posting in the subreddit aside from comments telling him how awful he is, which is as close to anything in this whole situation gets to something positive.

Please, Reddit, do something about this. I’m very much in favor of a site of user-generated content and freedom of expression, but that comes with a responsibility to make the hard (or in this case incredibly goddam easy) decision of what is acceptable as free speech and what cannot be tolerated. Reddit needs to be quicker about this process.

As Redditor Balegrim put it:

You know guy’s.[sic] The admins of Reddit haven’t removed this guy’s account yet or stripped his content. If they don’t, we might as well start various Reddits dedicated to letting them know EXACTLY how we feel about their tolerance for this kind of behavior.

I can’t even begin to try to explain how someone would create a subreddit or write a manifesto like that seriously. My brain immediately wants to classify it as trolling, but as the subreddit only gets worse from there, it appears to be 100% serious. It attempts to justify rape with accounts of how women have enjoyed being raped and even includes a fictional first-person narrative of such an event (from the imagination of ThePhilosophyOfRape, of course). I can’t even bring myself to quote it here, but you can see it on Reddit at your own risk.

If that’s not enough, TPOR has also commented on the MRA TheRedPill subreddit that he’s “corrected” seven women and convinced another man to rape one more, which is an admission of committing several felonies. I can only hope that it’s empty boasting. Please, please let that be the case, but either way, something needs to be done about this. No one should give this person the idea that this is acceptable or encouraged, whether it’s trolling, empty boastful nonsense, or anything else.

Meanwhile, hackers are making use of Reddit comments to connect Mac computers to a botnet with malware, which allows the hackers to use the infected machines to launch spam attacks on individuals or to take down entire websites with DDoS attacks. So, you’re up, Reddit. You’ve just secured $50 million in investor funds that you’ve said is to better address issues with your site, so put that money where these jerks’ mouths are.