The Wage Gap in the Video Games Industry 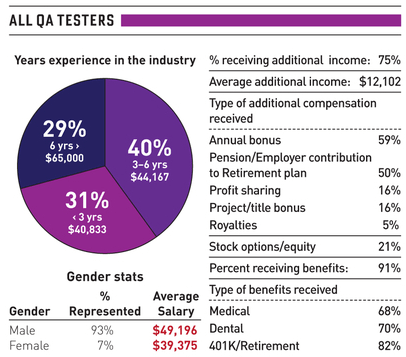 Borderhouse has a revelatory post up containing a number of graphs from Game Developer Magazine detailing salary breakdowns over experience in the industry and gender, revealing some extreme disparities between the compensation men and women receive for working the same kinds of jobs in the video games industry. According to these statistics, women generally paid between 20% and 30% less than their male counterparts, with a few outliers of 8.3% and a whopping 65%. Only in one field, programming, do women make slightly more than men: programmers, at 4.5% more.

Borderhouse makes the good point that some of these numbers may result from the lack of women in the industry: many of those who are in may have come to it recently, and therefore have less seniority and commensurately less compensation, a relationship not highlighted by GDM. I’ve highlighted QA testers here because the job’s notorious reputation for having high turnover and poor working conditions make it more likely to be exempt from such an explanation, but this is definitely a pattern that’s worth more research. You can see all the numbers here.