Game of Thrones Recap: And Now His Watch Is Ended

Last night’s episode was the best of the season so far by a wide margin. It might even count among one of my favorites in the entire show.

The 60 minutes of wonderment kicked off in typical Game of Thrones fashion with a captured Jaime wearing his severed hand around his neck, falling off his horse into muck, and being tricked by Locke into drinking horse urine. (Locke, how long had you been carrying a canteen of that stuff around?) He gets his hands—well, hand—on a sword and tries to fight his captors, which doesn’t go too well for him. Brienne wades in to try and protect him, but he still gets well and truly beaten up.

Back in King’s Landing Varys decides the time is ripe to tell Tyrion how he became a eunuch, despite the fact that Tyrion doesn’t seem all that interested in hearing about Varys’ missing bits. He was part of an acting troupe as a child, the Spider explains, until he was sold to a sorcerer who cut him off his junk “root and stem” and burned it in some sort of ritual. Just as Tyrion now wants revenge against Cersei, Varys for years wanted revenge against the sorcerer. He started out as a petty thief, but he remained patient and eventually his influence grew, until–and then he opens the crate—he was finally able to find the sorcerer. Surprise! Tyrion’s face upon seeing the tied-up sorcerer was one of my favorite things this episode, and in an episode this good that’s saying something. 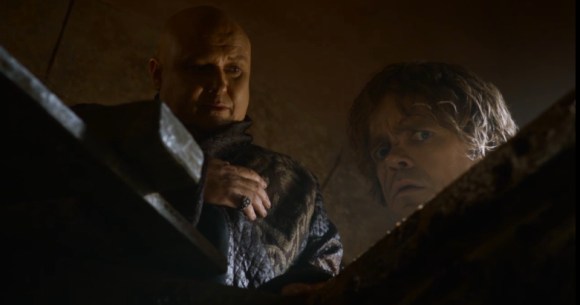 The writers created a delicate balance between Varys’ story and Tyrion’s in this scene, and it could have been awful if Conleth Hill, who plays Varys, weren’t so darn good. He killed it this episode.

Back above the Wall there’s conflict brewing among the men of the Night’s Watch, many of whom are bitter that their host Craster isn’t feeding them well enough and want to leave against the Lord Commander’s orders. Sam leaves to see Gilly, who tells him that she’d still like his help saving her son if it’s not too much trouble, thanks.

Bran, meanwhile, is dreaming of the three-eyed crow. Jojen tells him he has to climb a tree to catch it, but when he does his mother appears and starts yelling at him about how he should never, ever climb. And then he falls. So now Bran’s had traumatic dreams about both his parents, poor kid.

If you, like me, thought the bit from last episode about Pod’s sexual prowess was weird but wonderful, you probably enjoyed the next scene, where Ros explains Pod’s status as a sexual prodigy to the eunuch. I don’t know why we’ve gotten two Pod the Sex God scenes in as many episodes, but I honestly don’t care. It’s hilarious. Then it’s back to the plot, with Ros explaining that Littlefinger didn’t notice his Pod-related lost income because he’s too busy preparing to go visit Lysa Arryn. Strangely enough, he’s ordered two feather beds for his ship—one for him and the other, probably, for Sansa, whom Varys now knows he plans to take with him.

Then we have Joffrey and Margaery on the most macabre date ever, with the boy king showing off Targaryen tombs to his bride-to-be. You show know how to show a girl a good time, Joff. Margaery convinces Joffrey that his people love him (pause for laughter) and that he should step outside and do a bit of kingly waving to them. The couple goes to bask in the love of their subjects, but most of the cheering is for Margaery. Cersei, who’s been engaging in some banter about how men suck with Olenna, is understandably freaked out at how much the people love Margaery, the younger, prettier, better-at-political-manipulation future queen.

After that we catch up with Theon Greyjoy, who’s being escorted by his mysterious rescuer to see his sister at Deepwood Motte. Barring Joffrey, Gregor Clegane, and maybe one or two others Theon is one of the most hated characters on the show, but if your heart didn’t ache for him in this scene at least a bit then I just don’t know what to say. He tearfully explains that in taking Winterfell he was just trying to make his father proud, but his real father, i.e. Ned Stark, died on the steps of King’s Landing. “I made a choice” in betraying Robb, he explains, “and I chose wrong, and now I’ve burned everything down.”

His entire life was ruined by this one mistake. Granted, it was a huge mistake. He burned down Winterfell, killed two young boys, and caused the deaths of many others, some of whom he’d known most of his life. It’s not like he left the stove on. But this is Westeros, where everyone is obsessed with power and honor and vengeance and laying siege to castles and staging huge battles—he was just trying to be a part of that, same as Robb is, except he’s not as good as Robb, and he knows that. I’m not excusing the choices he made, which were awful, and I don’t think he would either. But it’s hard not to feel sorry for the guy, especially when it turns out his friendly rescuer was actually taking him back to the people he helped him escape from so he can be tortured some more. Surprise!

Then it’s back to our favorite captives. Jaime has basically given up on life. He refuses to eat, and Brienne calls him on the childishness of that, explaining that he needs to stay alive if he wants to take revenge. That’s incredibly important: She doesn’t say he needs to stay alive because of the promise she made to Catelyn to exchange him for Arya and Sansa, which can’t be fulfilled if he’s dead. No, he needs to stay alive for himself. She accuses him of “sound[ing] like a bloody woman” and being incapable of dealing with losing something important, which people in the non-Lannister world have to do all the time. It works, and he starts eating. Brienne says she knows Jaime lied about her father being rich to save her from getting raped and asks why he did. He doesn’t answer, probably because he doesn’t know. I love the dynamic between these two so much, I can’t even stand it.

First Jaime got upbraided, and now it’s Cersei’s turn: She goes to Tywin to ask what he’s doing to rescue her twin, to which he responds “I’m doing whatever I can, now go away.” There’s a pitch-perfect Cersei monologue where she tells her father she’s the child the most concerned with the family legacy, the one who should be allowed to “contribute,” even though she’s a woman. Tywin’s response: “I don’t not trust you because you’re a woman, but because you’re not as smart as you think you are.” Wow, Tywin, don’t sugarcoat it or anything. Cersei says that Margaery’s manipulating Joffrey, to which Tywin responds is “Well, duh” (but with gravitas, because Tywin Lannister).

Elsewhere in King’s Landing Olenna is firmly cementing her place in my favorite characters list by coming onto Varys and making him reaaaaally uncomfortable by asking “What happens when the non-existent bumps against the decrepit?” Never change, Olenna. Never change. She stops talking about sex long enough for them to have the beginnings of a productive discussion about how they can get Sansa away from Littlefinger.

Sansa, meanwhile, has a new friend in Margaery, who’s being as friendly to her as she was adoring with Joffrey. Once she’s Queen, Margaery explains, Sansa can marry Loras and go live in Highgarden. And they’d be sisters! Wouldn’t that be neat? Surely this will all work out well for Sansa, because the poor girl’s really due for a break. (One part of that sentence is true.)

Back at Craster’s keep there’s mutiny a’brewing among the Night’s Watch, with Rast and the-nameless-brother-played-by-Owen-from-Torchwood saying they should take Craster’s food. A fight breaks out, and by the end of it Craster is dead (yay), as is Lord Commander Mormont (noooooo!). And now his watch is ended, indeed. Sam runs and gets Gilly and her infant son and they escape into the woods, with Rast calling after him “Run fast, Piggy! And sleep well! I’ll be cutting your throat one of these nights!” like something straight out of Lord of the Flies.

Things are going (slightly) better for Arya, who might finally get to see Sandor Clegane brought to justice for killing her friend Mycah all the way back in season one: The Brotherhood Without Banners want to try him for something, but they don’t know any specific crime he’s committed, so Arya tells them about Mycah’s death like the boss she is. So Sandor, who’s deathly afraid of fire, will have to fight Beric Dondarrion, who’s converted to the religion of the fire god, in a cave with a giant bonfire the middle. I see no way this will go well for him.

And then, finally, we come to the best single scene so far this season. Daenerys purchases the 8,000+ Unsullied, giving Master Kraznys one of her dragons, Drogon, as payment. No sooner is the exchange made official than Dany lets her inner badass fly free. You remember all those times you called her a bitch and a whore, Kraznys, thinking she didn’t speak Valyrian? How wrong you were. Of course she speaks Valyrian, you moron, it’s her mother tongue! Oops.

She orders her new army to kill all the masters in the city and free all the slaves. Kraznys, meanwhile, is having a tougher time controlling his new dragon than Dany is her new army. Dany gives the command (“Dracarys”—the word she uses to tell her dragons to cook meat and, with the warlock last season, light people on fire), and Drogon makes Kraznys roasted, toasted, and burnt to a crisp. She then frees all the slaves and says that any of them can leave if they want, or they can stay and fight with her. They choose the latter, and Dany marches out of the city with her army at her back, her dragons (all three of ’em) flying overhead, and We Are the Champions playing in the background (well, at least that was my mental soundtrack).

I don’t have many book-related comments to make on this episode, save that I’m excited to see how they play the [book spoilers] Ramsay Bolton thing out. Theon in book three onward—or book four? I don’t remember the exact timeline—is kind of like Jaime after book one, in that at first they were both incredibly unsympathetic characters, but then their lives take horrible turns and you start to get more insight into them. Jaime turned into a fan favorite, and I don’t expect that for Theon once his karmic retribution for Winterfell starts to really swing into gear, but I’m curious to see if people start to hate him less. I hope so. He’s an incredibly complex character. And you know what? I’ll say it. As a character, I like him. There.