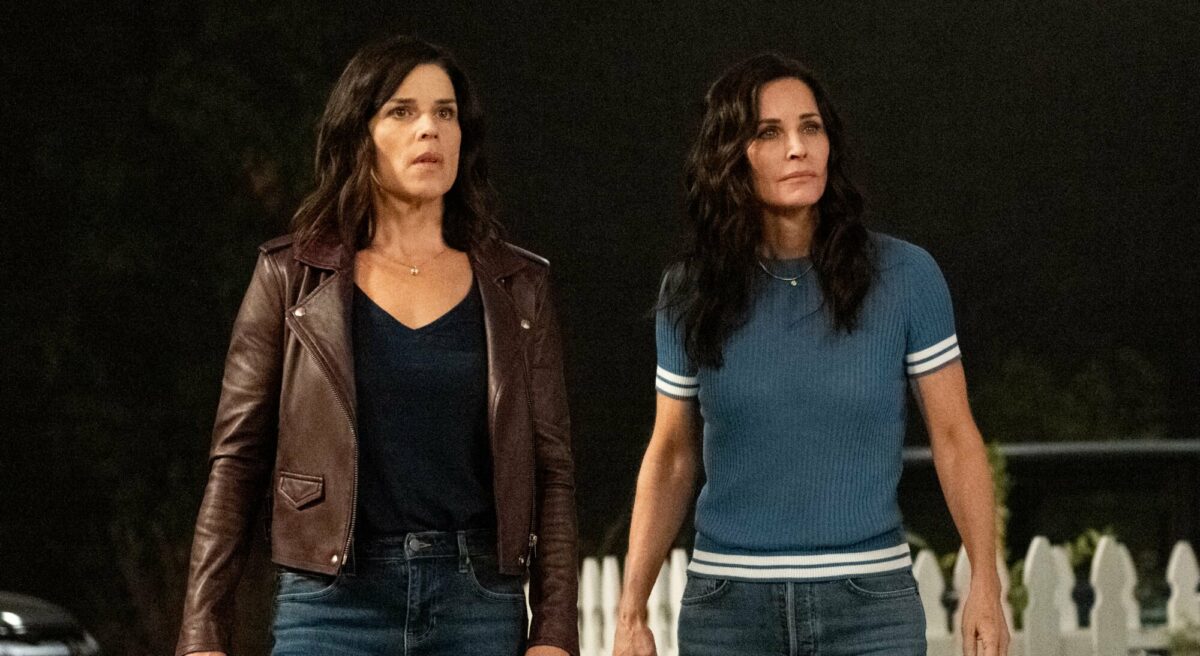 It’s been 11 years since Scream 4 was released, but in one week the next chapter in the meta slasher series hit theaters. The confusingly titled ‘Scream’ (just call it Scream 5, guys) has already been screened for critics, and so far the first reactions have been uniformly positive. The Scream franchise has had such a strong run, thanks to smart scripts, compelling performances, and genuinely twisty mysteries.

‘Scream’ will be the first in the franchise not to be directed by Wes Craven (who died in 2015). Matt Bettinelli-Olpin and
Tyler Gillett (Ready or Not) directed the film, with original screenwriter Kevin Williamson executive producing. Stars Neve Campbell, Courteney Cox, and David Arquette return to their original roles, alongside new additions Kyle Gallner (A Nightmare on Elm Street), Mason Gooding (Booksmart), Mikey Madison (Better Things), Dylan Minnette (13 Reasons Why), Jenna Ortega (You), Jasmin Savoy Brown (Yellowjackets), Sonia Ammar, Jack Quaid (The Boys), and Melissa Barrera (In the Heights). Let’s take a look at what folks are saying about the latest chapter in the Woodsboro saga.

What a welcome return to Woodsboro #Scream is! A razor sharp, bloody introspection on the genre and Wes Craven's legacy. All the feels and one hell of a genre start to 2022. My horror heart is so full.

#Scream freakin' slays! It's a textbook example of how to revive and reinvigorate a franchise and do it in killer style. Brutal genius, it has the razor-sharp smarts of the finest entries in the series with a third act that absolutely nails it. Two thumbs way up! #ScreamMovie pic.twitter.com/ZMmCDUFUrj

The new #Scream is the real deal. Such a well written script that keeps you guessing and wades into the treacherous waters of fandom in 2022. ‘Scream’ fans are going to love it. pic.twitter.com/caf2SqG0so

The new #Scream is a BLAST & my favorite since the original. There’s some sharp writing here – a nice balance of well-crafted scares & amusing commentary on modern horror. It also pokes a lot of fun at itself, too, while remaining a bloody whodunnit & a damn good time. I’m a fan! pic.twitter.com/QZiguvUIWo

Have finally seen Scream 2022 #Screammovie and it delivers… and then some.

If this franchise means something to you — and it means so damn much to me — you will leave satisfied, moved, and wanting more.

Oh yeah, it's scary (and funny) as hell. pic.twitter.com/U88VOS1FUb

I loved SCREAM (2022). It pokes fun at itself, 'elevated horror,' and has a lot to say about movie fandom. It leans deep into legacy in the right ways and uses the 'Scream' family to great, and surprising, effect. New crew is excellent too, especially Jenna Ortega. #ScreamMovie pic.twitter.com/cyUrpoxMFP

Super impressed by how they weave the OG cast and new ensemble together — and the purpose of it. Some really creative and interesting ideas in the mix here that I no doubt will obsess over via many, many viewings.

As someone who has been in love with this franchise for a little over 25 years now, I totally and completely loved @ScreamMovies. Brutal kills, fun mystery & both the Legacy cast & newbies were great. Wes would be proud. #ScreamMovie #Scream pic.twitter.com/EoMkeI1CtR

Scream hits theaters January 14. No streaming plans have been announced yet, but it will presumably air sometime soon on Paramount+.