Who Is the Real Villain of the Emily in Paris Love Triangle? 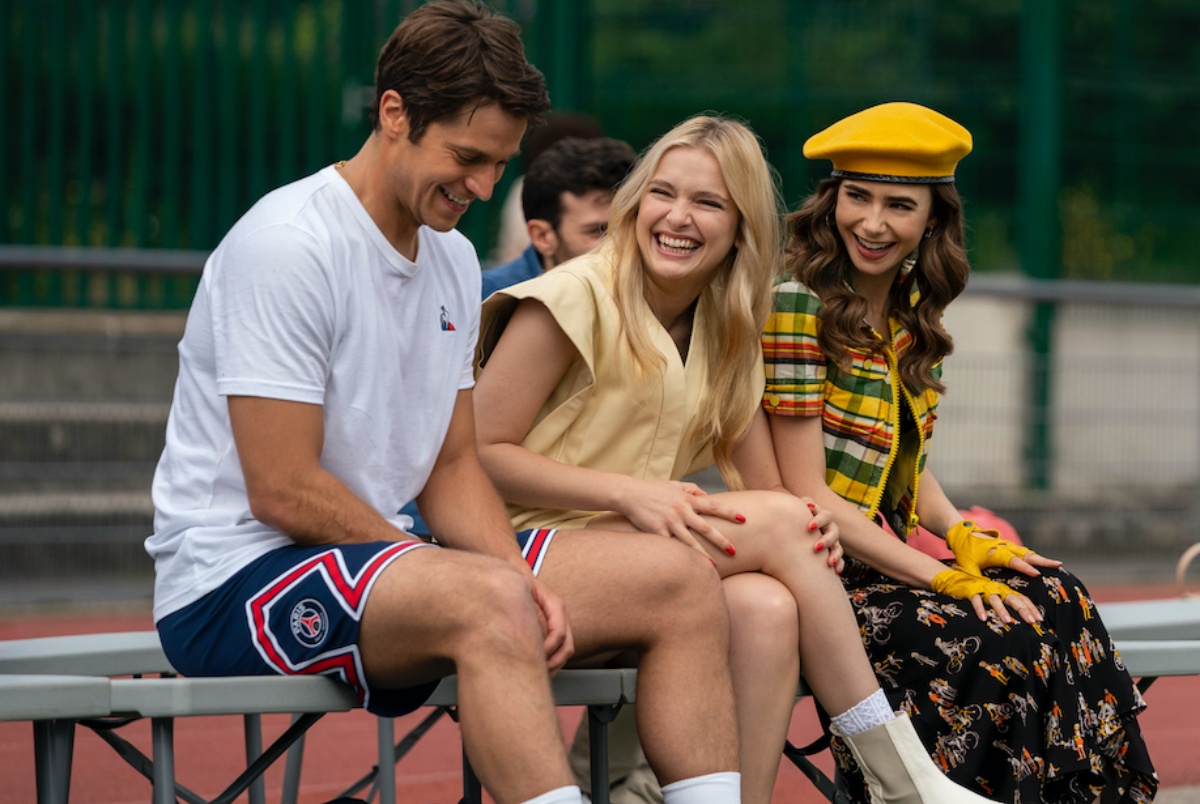 Netflix’s Emily in Paris is a bad show, but it is also addictively entertaining in the same way that OG Gossip Girl, the 90210 reboot, and other over-the-top teen dramas often are—this time they are just 30-year-old characters rather than 30-year-olds playing teenage characters. Emily in Paris is guilty of many sins, but among the worst of them is the love triangle between Emily, Gabriel, and Camille.

**Spoilers for Season Two of Emily in Paris.**

When Emily (Lily Collins) arrives in Paris with nearly zero knowledge of French culture, the language, or really anything of use sans her “marketing skills,” she ends up accidentally going to her downstairs neighbor’s apartment because the concept of the ground floor not being the first floor confuses her twice. That is when she meets Gabriel (Lucas Bravo).

Gabriel is a handsome chef who finds Emily’s lack of knowledge endearing and helps her around the apartment, makes her omelets, and becomes her first real love interest. Eventually, they kiss after Emily makes the first move, due to Gabriel saving her work dinner with his amazing cooking.

After Mindy (Ashley Park), the next real friend in Paris that Emily makes is Camille (Camille Razat), who assists her in buying some flowers and is just a very nice French person. It’s a cute bond, and they have great friendship chemistry. What could go wrong? Well, we find out that Camille is Gabriel’s girlfriend!

And so, to answer the question that I posed in my headline, it is Gabriel. Gabriel is the villain of this love triangle. But let me continue with proving this thesis.

Gabriel is the only person, at the beginning of this love triangle, who has all the information. He knows that he is in a five-year relationship with Camille, and he also knows that there is this attraction between him and Emily that led to a kiss.

At no point does he act responsibly with any of this. As the friendship between his girlfriend and his … I guess potential side-piece(?) grows, he never decides to be a good person.

Emily isn’t innocent in this, either, since she could also be honest with Camille, or, at the very least, stop lusting after Gabriel. But this is an MTV production, so all the main characters are playing clown games.

Season one ends with Camille and Gabriel’s relationship being in a weird place and Emily, thinking that Gabriel is leaving … they have sex. It’s shitty because at this point Emily and Camille are good friends and they are only broken up for a second. Doing it simply to know what it would feel like is really awful on Emily’s part.

On Decider, writer Meghan O’Keefe, made the following conclusion about the love triangle: “Emily in Paris argues that the core emotion driving a love triangle isn’t spite or jealousy, but love. Emily’s in love with Gabriel, and Gabriel might be in love with Emily, but Gabriel is definitely in love with Camille, and Camille adores both Gabriel and Emily, to boot. Further on in Emily in Paris‘s first season, Emily makes it clear that she loves Camille, too. The drama stems from the fact that there’s too much damn affection for these three people to juggle!”

Season two takes this to a new level when Gabriel ends up staying in Paris and Camille is dealing with the deep sadness of losing someone that she loved for five years, and Emily is trying to do better, but at the same time, no one is helping her make a good choice. During her birthday party, Camille sees the cast iron skillet that was precious to Gabriel and realizes that they slept together.

Camille is positioned in the second season, following this point, to be the manipulative snake because she’s trying to keep Emily and Gabriel apart—but for me, that is kind of bullshit. Especially their “pinky promise” not to go after Gabriel.

Emily was dating and going away with someone at the beginning of season two. She moved on to the superior Alfie (Lucien Laviscount), and so when Camille gets back together with her ex-boyfriend without talking to Emily about it … I get it.

Why would she honor a promise when no one—not Emily, Gabriel, or even Min, who she has been nothing but friendly to—cared about her feelings?

I’m Team Camille. Emily has shown herself to be nothing but a cheater and bad friend, which is an interesting character flaw journey, but when it comes to the love triangle, we know very much who the trash is. Gabriel.