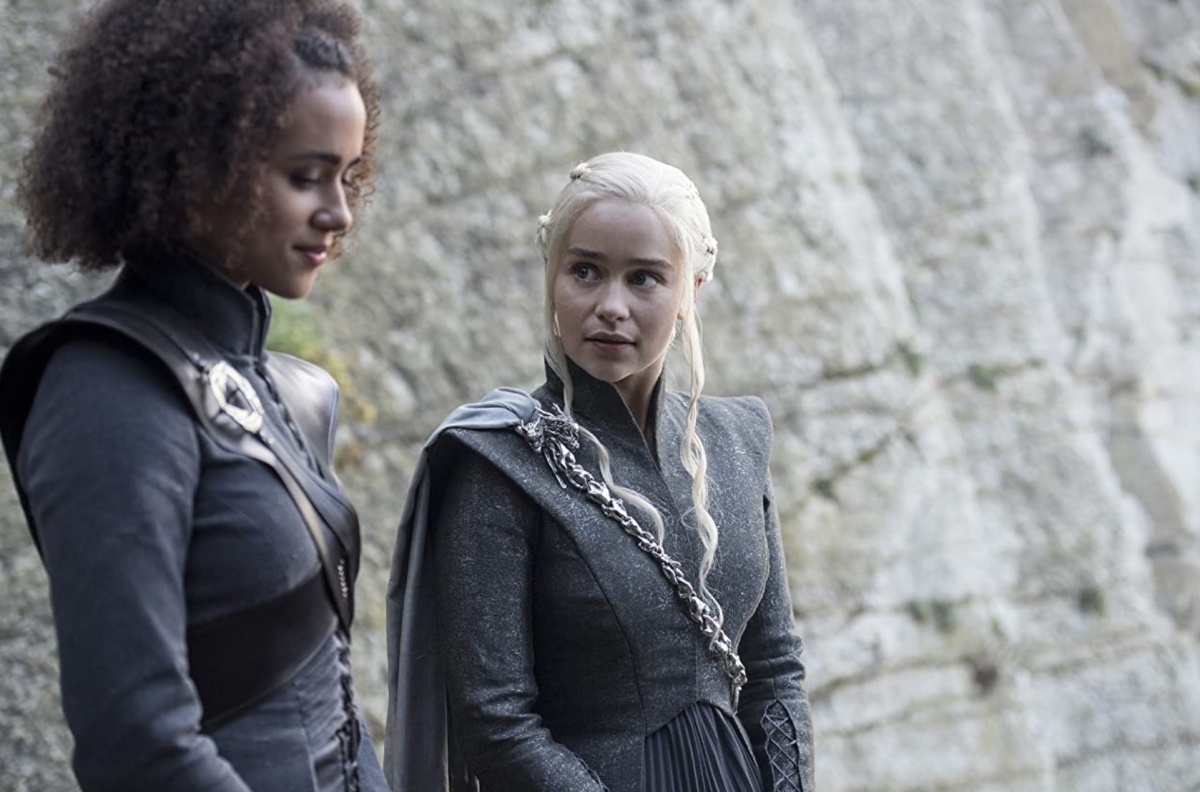 Nathalie Emmanuel got a huge big break when she starred as the translator and treasured companion to Daenerys Targaryen, Missandei, on HBO’s Game of Thrones. Emmanuel joined the cast in season three in a role that was greatly aged up and expanded upon from the books. With that aging up also came some nudity.

Game of Thrones has been heavily and rightfully criticized for its handling of nudity, but we have also gotten stories of the cast members fighting solidarity with each other. Emilia Clarke, who played Daenerys, spoke about how her onscreen husband, Jason Momoa, defended her, and the actress paid that kindness forward by having Emmanuel’s back.

During an interview with British Vogue, the British actress explained how the two had an easy friendship that was made even stronger by often being the only two women on set.

“Emilia and I got on like a house on fire from the beginning,” Emmanuel began. “When I joined the cast, she had already been shooting Game of Thrones for a few years, and she was definitely ready to have some female energy around her. She and I always looked out for each other. If you’re the only girls on a male-dominated set, it bonds you in a certain way.”

She continued: “For example, in my first season, my costume was pretty revealing, and there was an incident with a supporting actor who made a comment about it on set – I mean, typical – and Emilia straightaway had my back. It got handled.”

As someone who loves both actresses, this makes me exceptionally happy to hear. Even if you have done nudity before, I think that context matters. Being in a revealing outfit because you are playing an enslaved person, while being ogled that outfit in the real world by coworkers, is uncomfortable.

Even from a character writing perspective, while Missandei does eventually wear a crop top like Xena’s Gabrielle at some points, she never has a literal boob window dress once she is freed.

In addition to this, Emmanuel also spoke about the public reaction to her character’s death. At the time, Missandei was one of two regular non-white characters on the show, along with Jacob Anderson’s Grey Worm. The two were love interests and both of them were formerly enslaved characters. Missandei was murdered by Cersei in order to threaten Daenerys, and it led to … well:

“It definitely caused me to reflect a lot more – about race and diversity more generally. At the end of the day, if there’s ever a show on the level of Game of Thrones again, representation has to be part of the conversation from the beginning,” she said. “That way, there’s no single person who has to represent every other person of colour. It’s a conversation I used to have a lot with Jacob [Anderson], who played Grey Worm, the only other major non-white character in the series. We were always really conscious of how much our being part of Game of Thrones mattered to people. It made us really protective of Missandei and Grey Worm.”

And that’s the key issue. While you can say from a writing perspective that Missandei’s death makes sense, it also brought the show’s overall non-white representation down to one, and that was shameful.

Thankfully, Emmanuel has appeared in a bunch of projects since, where we don’t have to worry about her dying onscreen anytime soon!