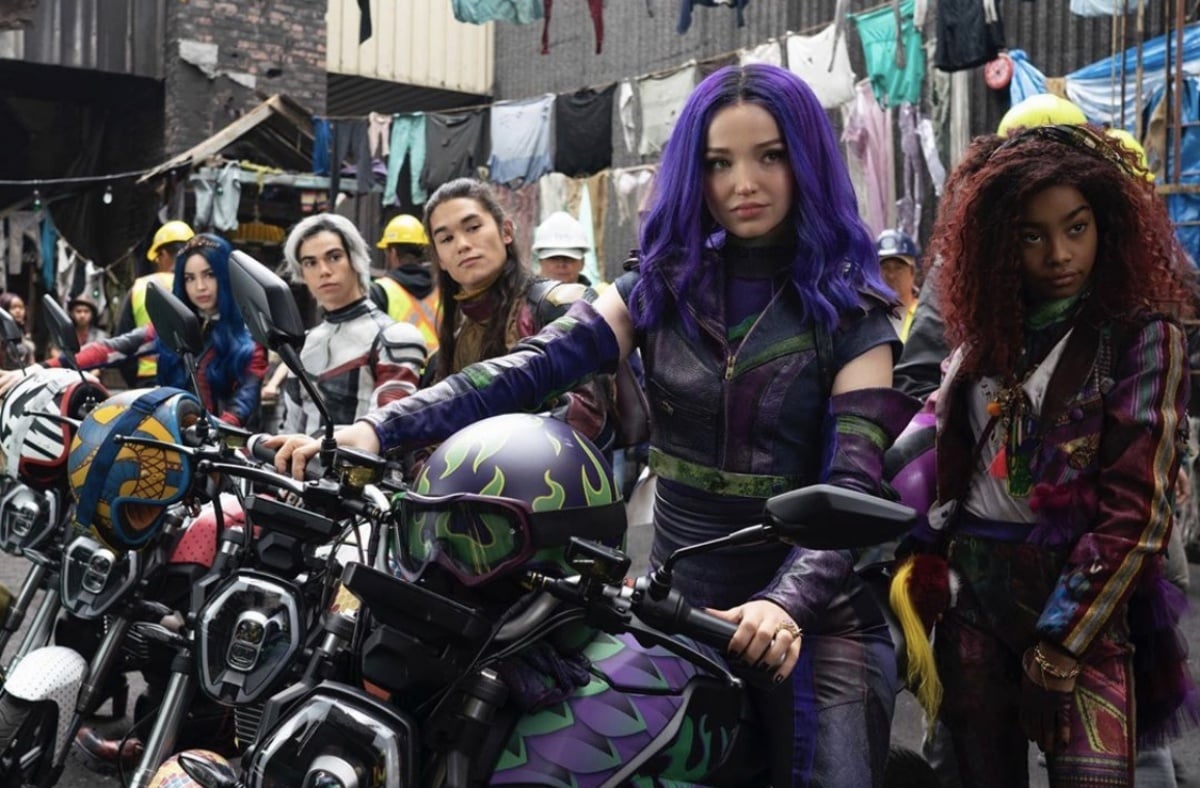 I deeply love Disney’s Descendants movies. Not only are they filled with some really talented young people, but the movies have been able to provide some powerful commentary about change and second chances. With the final installment Descendants 3, which aired this Friday, it was a powerful final chapter to this fun, musical trilogy.

The franchise, follows four villains’ kids: Mal (daughter of Hades and Maleficent), Evie (daughter of the Evil Queen), Carlos (son of Cruella), and Jay (son of Jafar), who grew up on the Isle of the Lost, an island prison where all the Disney villains were sent. It’s pretty much a magic-less slum. The villains descendants have been forced to grow up there, until Prince Ben (son of Belle and the Beast) decide that the children of villains should not have to pay for their parents’ crimes. He invites the four of them to Auradon, the homeland to all the Heroes. There, the core four learn to be good, betray their parents, and become citizens of Auradon. Ben and Mal become a couple (this will be important later).

The second film brings in Uma (daughter of Ursula), who raises the stakes of the Auradon/Isle situation. While it’s great that Mal and her friends are living the good life, the rest of the Villain Kids have been left behind. At the end of Descendants 2, it is decided that Auradon will start allowing more and more VKs to come, which is where our story in 3 begins.

When bringing in the new lot of VKs, Hades nearly escapes, causing a panic. That’s tied in with Princess Audrey (daughter of Phillip and Aurora) feeling jilted and being shamed by her grandmother. She ends up breaking into the museum and stealing Maleficent’s scepter. The events are blamed on Uma, who is still on the loose, and the people are in a panic. Mal suggests that they need to close the barrier for good to ensure no one else can cross it.

When Mal lies to Evie and tells her that it’s the royals who are thinking about that solution, Evie says that it’s great that Mal will be queen because she’ll be part of these decisions and give a voice to the kids who are being left behind.

Among all the fun dance numbers, it is this conflict that is at the core of D3 and, really, the entire Descendants series.

While, due to the age demographic of the series, it isn’t going to be too explicit about the conditions on the Isle, we’ve heard the kids say they don’t have fresh fruit, trees, and aren’t used to eating food that doesn’t come with flies and dirt. The series doesn’t make any attempts to justify their parents’ actions, but it does make it clear that these kids are paying for something they didn’t do.

When Audrey becomes the villain of the story, everyone initially thinks it’s Uma, or that Audrey is under a spell. Instead, it’s the pressures of her perfectionism and the fact that, until recently in her life, she’d never been told “no.” In her eyes, she was being replaced by someone who she saw as “inferior.” Her grandmother, Queen Leah, also makes comments that the only reason the barrier should be opened is to throw people back in.

We can all see the subtext of this narrative, and while it’s all dressed up in fairy tale language, you can easily see what’s going on here. Mal’s role in this is especially interesting, because she has so well assimilated herself into a role of a “good person” that she initially has no qualms denying kids like her the opportunity to have better. She’s concerned about the life she has in Auradon—a life she only has becomes someone took a chance on her.

In the end, she realizes this is wrong, and after defeating someone who should be a hero, with the help of those who should be bad, we the audience visually see what Mal says later: you never know where the heroes or the villains will come from.

Some of been critical of turning this kids’ movie into a political statement, but actress Dove Cameron, who plays Mal in the movies, had a very good point to make on Twitter: the kids who watch this won’t always be kids, and they are not ignorant of the world around them.

i mean…sounds like a recipe to create under-informed, sheltered & under-opinionated adults? it’s not forcing politics on kids, it’s about creating relevant commentary for young people to start exploring. they won’t be children forever. this is the time to start discussing this. https://t.co/isWHDwr5Cu

This movie also has a touching, but tragic element to it, as it is dedicated to the late Cameron Boyce, who played Carlos in the movies. He passed away last month from complications due to epilepsy. Boyce was an extremely talented performer, and I became a fan of his through these movies. I think this movie is an especially powerful tribute to him because one of the things he was proud of in life was that his maternal grandmother, Jo Ann (Allen) Boyce, was one of the Clinton Twelve, the first African-Americans to attend an integrated high school in the south, in 1956, as ordered by Brown v. Board of Education.

I’m sure he would proud and happy that dedicated to him is a movie that champions breaking down barriers, diversity, and the power of a few kids being given the chance to change the way the world sees them.