We Discovered The Clitoris In 2009? Heyyy, Wait A Minute… 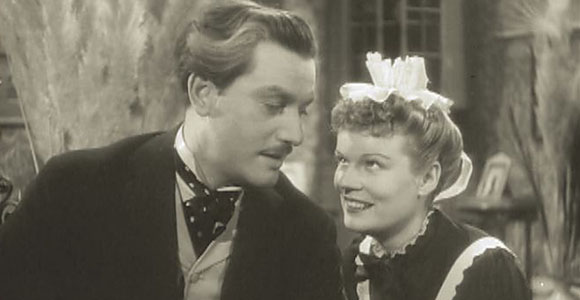 I’m going to do my best to stay serious and scientific here but well, this is a post about the clitoris so it may not last. This particular part of the female anatomy has been something the general public has given a lot of thought but as it turns out, science has mostly ignored. Turns out, we only really discovered the clitoris in 2009. Women the world over may disagree but we now know there’s a whole lot more than meets the eye when it comes to the clitoris and the results are rather stimulating. For your brain. Because you’re learning something new. Oh, forget it, just read on. (Following images are internal anatomical illustrations and should be safe for work.)

According to the official blog of the Museum of Sex in New York City, there is an internal clitoris. Yes, you heard that right. Internal. As you may or may not know, the clitoris has only one purpose, that of pleasure. “It is not required for reproduction.  It doesn’t have a urethra running through it like the penis, and thus, does not urinate,” writes Ms. M on the blog. “Sadly, it is precisely because the clitoris has no function apart from female pleasure that science has neglected to study it as intricately as the penis.”

If you asked someone to point to this particular body part they’d (hopefully) point to a tiny spot at the top of the vulva just under the “hood.” But apparently, that’s only the tip of the iceberg, as it were. Highlighted in pink below is the actual size and location of a woman’s clitoris. 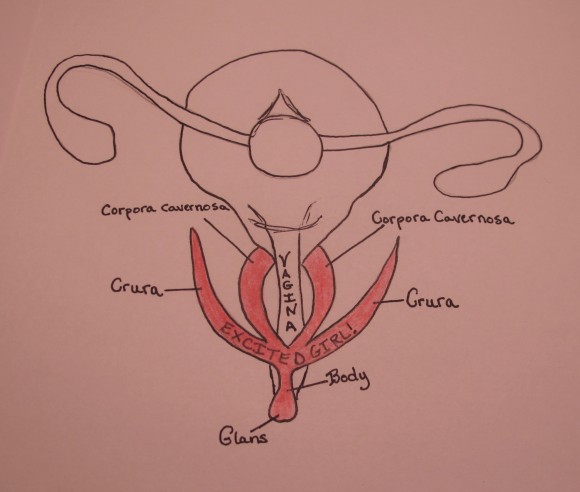 Well hello there! Nice to meet you, clitoris! And here I thought I knew you so well…

Here’s the exact breakdown of this image.

The scientific name for the external “little button” or “bulb” is glans. Not to be confused with glands, glans simply refers to a small circular mass. This little structure contains approximately 8,000 sensory nerve fibers; more than anywhere else in the human body and nearly twice the amount found on the head of a penis! From reading her work, it’s clear that Marie Bonaparte mistakenly thought that the clitoris was completely comprised of the glans; and because it is super sensitive and all anyone can see of the organ, her confusion is mirrored by most women today. The fact is, though, that most of the clitoris is subterranean, consisting of two corpora cavernosa (corpus cavernosum when referring to the structure as a whole), two crura (crus when referring to the structure as a whole), and the clitoral vestibules or bulbs.

The glans is connected to the body or shaft of the internal clitoris, which is made up of two corpora cavernosa. When erect, the corpora cavernosa encompass the vagina on either side, as if they were wrapping around it giving it a big hug!

The corpus cavernosum also extends further, bifurcating again to form the two crura. These two legs extend up to 9cm, pointing toward the thighs when at rest, and stretching back toward the spine when erect. To picture them at rest, imagine the crura as a wishbone, coming together at the body of the clitoris where they attach to the pubic symphysis.

Near each of the crura on either side of the vaginal opening are the clitoral vestibules. These are internally under the labia majora. When they become engorged with blood they actually cuff the vaginal opening causing the vulva to expand outward. Get these puppies excited, and you’ve got a hungrier, tighter-feeling vaginal opening in which to explore!

Words like “subterranean” and “cavernosa” just make me think the clitoris is destined for further exploration. By science. Hey, look! It’s an erect, internal clitoris! 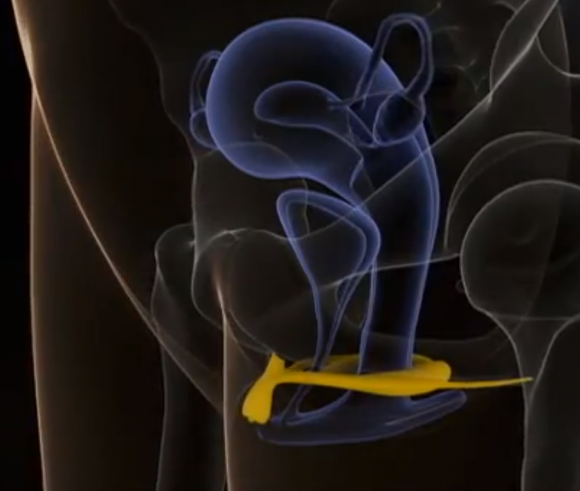 So what does this mean for you, a person with a clitoris? And you, person who likes someone with a clitoris? Just because a good chunk of it is inside the body doesn’t mean it’s useless. “Many women can bring themselves to orgasm without ever inserting anything inside of themselves. They are causing their internal clitoris to become erect and likely stimulating their glans, bulbs, and crura by rubbing themselves on the outside,” writes Ms. M. “The corpus cavernousum is the additional erectile tissue encompassing the vagina, and greatly erogenous when stimulated internally.”

Why are many of us just learning about this for the first time? “The sad fact is it wasn’t until the 1990’s that researchers began using MRI to study the internal structure of the clitoris. By then, the intricate details of the penis were already well known,” according to Ms. M. “Urologist Helen O’Connell of the Royal Melbourne Hospital set out to better understand the microscopic nerve supply to the clitoris using MRI, something that had already been done for men with regard to their sexual function in the 70s. In 1998 she published her findings, informing the medical world of the true scope and size of the clitoris. Yet ironically that same year, men in America began popping Viagra to cure erectile dysfunction.” Sadly, many textbooks, medical guides and yes, the internet, still do not include this information or particular viewpoints of the female anatomy.

“Alas it wasn’t until as recent as 2009, French researchers Dr. Odile Buisson and Dr. Pierre Foldès gave the medical world it’s first complete 3-D sonography of the stimulated clitoris,” she said. “They did this work for three years without any proper funding. Thanks to them, we now understand how the erectile tissue of the clitoris engorges and surrounds the vagina – a complete breakthrough that explains how what we once considered to be a vaginal orgasm is actually an internal clitoral orgasm.”

Also, an important fact to point out, “Dr. Foldès has been performing surgery on women who have suffered from clitoral mutilation, restoring pleasure to over 3,000 circumcised patients,” and is dedicated to studying the clitoris for many reasons. “When I returned to France to treat genital mutilation, I was amazed that they were never tried. The medical literature tells us the truth about our contempt for women,” he said. “For three centuries, there are thousands of references to penile surgery, nothing on the clitoris, except for some cancers or dermatology -and nothing to restore its sensitivity. The very existence of an organ of pleasure is denied, medically. Today, if you look at the anatomy books that all surgeons have, you will find two pages above. There is a real intellectual excision.“

You can read more about the internal clitoris and watch a video of artist Betty Dodson drawing it at the Museum of Sex.

I, for one, am amazed by this news. Anyone else think it’s kind of sweet that the clitoris has octopus arms it uses to hug our vaginas? We make a great team.