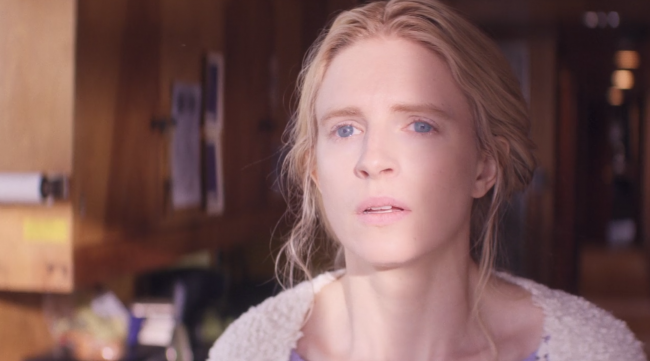 Brit Marling has been a game-changing presence in film and television, with her micro-budget indie hits Another Earth and Sound of My Voice and her cult classic short-lived Netflix series The OA (one of Netflix’s crueler cancellations). In a new essay for the New York Times, Marling deconstructs the trope of the “Strong Female Lead”.

In charting her journey from Goldman Sachs analyst to struggling actress to self-made indie darling, Marling delves into the lack of nuanced roles for women in Hollywood. She describes endless days of auditioning to be someone’s wife or a woman whose defining characteristics are her cleavage. She finally decides to write roles for herself, and realizes that most women in film are victims of violence … especially the women who dared to experience freer, more independent lives.

She delves into the nebulous yet universal concept of the Strong Female Lead, describing her as “Enter, stage right: the Strong Female Lead. She’s an assassin, a spy, a soldier, a superhero, a C.E.O. She can make a wound compress out of a maxi pad while on the lam. She’s got MacGyver’s resourcefulness but looks better in a tank top.”

We’re all deeply familiar with the Strong Female Lead, of course. She’s Ellen Ripley, Sarah Connor, Buffy Summers, Black Widow. She’s every girl armed with a gun and a quip. And we love her because, well, there aren’t any alternatives. The Strong Female Lead is an oasis in a desert of powerless female characters who function as little more than set dressing.

Marling writes, “It would be hard to deny that there is nutrition to be drawn from any narrative that gives women agency and voice in a world where they are most often without both. But the more I acted the Strong Female Lead, the more I became aware of the narrow specificity of the characters’ strengths — physical prowess, linear ambition, focused rationality. Masculine modalities of power.”

The modalities, as Marling calls them, refer to the masculine framework within which all narratives exist. The foundations of storytelling, like the Hero’s Journey, are specific to strengths and values that celebrate men and masculinity. It’s a reductive framework that gives us stories based on the simplest most pandering premise: boobs plus guns equals female empowerment.

And while these characters can be beloved and cherished by everyone, they are playing out in a framework that validates masculinity only. The game is rigged not just against women, but against womanhood.

“When we kill women in our stories, we aren’t just annihilating female gendered bodies. We are annihilating the feminine as a force wherever it resides — in women, in men, of the natural world. Because what we really mean when we say we want strong female leads is: ‘Give me a man but in the body of a woman I still want to see naked’.”

Marling follows up by writing, “It’s difficult for us to imagine femininity itself — empathy, vulnerability, listening — as strong. When I look at the world our stories have helped us envision and then erect, these are the very qualities that have been vanquished in favor of an overwrought masculinity.”

There’s a lot to enjoy in the essay, which is well worth reading in full. Marling found a home for her voice in the world of science fiction, and inspiration in authors like Margaret Atwood and Octavia Butler. It takes creating a wholly new universe to escape and explore the patriarchy that so thoroughly defines our own.

“I don’t believe the feminine is sublime and the masculine is horrifying,” Marling writes. “I believe both are valuable, essential, powerful. But we have maligned one, venerated the other, and fallen into exaggerated performances of both that cause harm to all. How do we restore balance? Or how do we evolve beyond the limitations that binaries like feminine/masculine present in the first place?”

It’s an excellent question, and one I’m sure we’ll see Marling grapple with in future projects.