Reality vs. Bodice Ripping: The Truth About Victorian Underwear 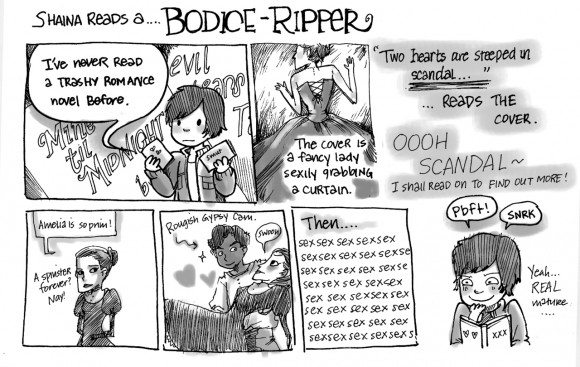 You know you’ve had fantasies about it before. You’re a gorgeous lady in times before social networking — back when social networking actually involved being social. A handsome gentleman caller approaches you warmly, caressing your neck. You invite him up to a lofty bedroom with velvet draping and scented oils (or something). He begins to kiss you gently, you return the kisses … it’s getting hotter, and you just can’t stand the thought of your hands on anything but each other! You rip off his coat, he tears open your dress, revealing heaving bosoms, suffocating against the confines of a whale-bone corset! Take me, Dr. Egon Spengler! Take me now!

Except all of this would be highly inaccurate. Because romance novelist Deeanne Gist has gotten to the bottom of all the lacy underthing mysteries and debunked bodice-ripping scenes like the one I just described at the annual convention for Romance Writers of America. But a girl can dream (if that’s her thing).

As it turns out, seducing a woman in the Victorian era would have been quite an undertaking. Gist wanted to make sure that the scenes she was writing in her own novels was true to form and discovered that it wasn’t quite as easy as 1-2-wheeeeee! At the convention, which took place in New York, she gave a live demonstration of everything that went into dressing the Victorian woman.

It took an hour for Ms. Gist to squeeze into a dozen layers that a lady would have worn in the 1860s — stockings, garters, bloomers, chemise, corset, crinoline or hoop skirt, petticoats, a shirtwaist or blouse, skirt, vest and bolero jacket. By the end, workshop attendees were skeptical that seductions ever occurred, with so many sartorial barriers.

“How did they ever have hanky panky?” asked novelist Annie Solomon.

Indeed! Gist, along with several other historians (and history buffs — see what I did there?), has toured the country with her workshops and unlocked several mysteries about what women wore under their clothes. For example, while commonly written in the opposite manner, bodices and corsets are laced in the back. And it takes a looooong time to complete that lacing before several inches are taken off a woman’s waist. There is also a blouse underneath that corset, so add that layer to the things that our heroes (and heroines) are ripping off these women. And did you ever wonder why bloomers had splits in them? Hint: the reason is toilet-related.

So, we can look at this two ways. 1: This was a dastardly way to not only torture women (no wonder they were always seen as prone to fainting if they’re wearing all that crap in the summer) but to deter sex and keep women “pure.” Or 2: turning the latter part of that statement on its head and looking at it as a brilliant method of foreplay and extended seduction. Striptease, anyone?