Hell Yes, a Movie Is Being Made About the Winchester Mystery House

No, not those Winchesters. 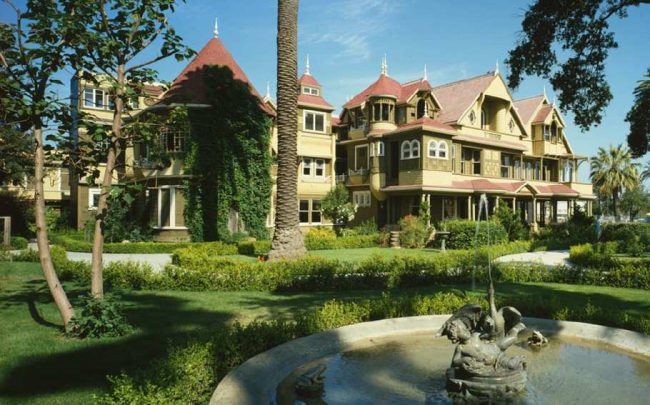 I’ve long been obsessed with the Winchester Mystery House, the spooky, eccentric mansion in San Jose, California built into Hogwarts-like dimensions because its owner believed she was being haunted by the spirits of people killed by her husband’s Winchester rifles. The story always been ripe for movie adaptation, and now we’re getting one starring no less than Dame Helen Mirren. Friday is saved!

I mean, the place is called the Winchester Mystery House. Mrs. Winchester, who had an unbelievably vast fortune at her command thanks to Winchester Rifles, directed builders to build around the clock for 38 years in order to appease the spirits. Construction commenced in 1884 and did not end until her death in 1922. The house is full of staircases that go nowhere, concealed passageways, false doorways, and no doubt a chamber of secrets with a basilisk. And please meet Mrs. Winchester:

She reportedly kept her face covered with a dark veil at all times, and there are stories of her firing servants who caught a glimpse of her face by accident.

The House has been the subject of cinema before, but this production seems poised to launch the story into widespread awareness. The film, called Winchester, is set to be directed by Michael and Peter Spierig, the brother duo behind Saw: Legacy. It will star Helen Mirren as the veiled millionairess and Jason Clarke (Dawn of the Planet of the Apes) as her psychiatrist. Here’s the official synopsis:

The film follows the story of firearm heiress Sarah Winchester (Helen Mirren), who was convinced that she was haunted by the souls killed at the hands of the Winchester repeating rifle. After the sudden deaths of her husband and child, she threw herself into the 24-hours a day, seven days a week construction of an enormous mansion designed to keep the evil spirits at bay. But when skeptical San Francisco psychiatrist Eric Price (Jason Clarke) is dispatched to the estate to evaluate her state of mind, he discovers that her obsession may not be so insane after all. Winchester will take audiences inside the labyrinth-like house that is believed to be one of the most haunted places in the world.

Since Winchester is coming from horror film directors and the synopsis teases the idea that the spirits could be real, I’m betting that supernatural goings-on will manifest and be scary as hell. I really hope that it’s more than just things-go-bump-in-the-night-frights—I’d love it if the movie is also rich with historical context and pathos. The inclusion of the classy, Academy Award-winning Helen Mirren as Sarah Winchester seems like a very good sign. I can’t wait until we get to explore the labyrinthine hallways of the House on-screen. Bring on the spirits.

(via Blastr, image via WikiMedia Commons)